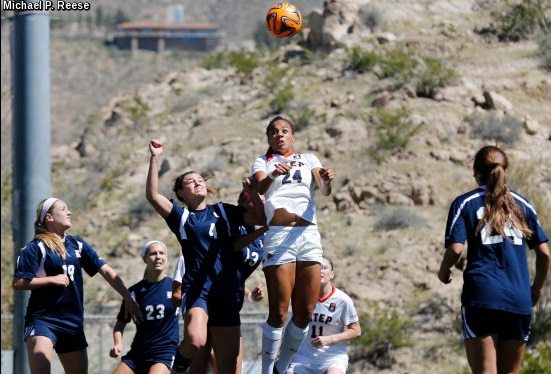 IRVING, Texas – UTEP was predicted to land fourth out of 14 squads in the 2015 Conference USA regular season, as voted on by the league’s head coaches. The top eight finishers in the conference will qualify for the 2015 C-USA Championships, which are slated for Nov. 4-6 on the campus of FIU. Additionally, junior Aleah Davis was voted to the preseason All-League team. Davis was a third-team All C-USA honoree in 2013 while securing a spot on the first team last year.

The Miners bring back seven starters and 14 letter winners overall from the 2014 squad which secured a third-place showing in C-USA for the second time in as many years. The top seven point producers return, including 2014 All-Conference honorees Davis (first team) and Angela Cutaia (third team). Cutaia paced the team in game-winning goals (four), goals (eight),  points (19), shots (65), shots on goal (35) while Davis was second on the squad for both goals (5) and points (11).

Junior Hannah Nicholson, who led the team in assists (five) through efforts on set pieces, is back in addition to fellow classmate Bri Barreiro. Barreiro tied for second on the team in assists while checking in third for goals (3) and points (10). Another name to keep an eye on is sophomore Sydney Rapp, who was voted to the 2014 All C-USA Freshman team. UTEP will also feature nine true freshmen on the roster, equaling the second-highest sum in the Kevin Cross era.

The 2015 season will get underway at the renovated University Field with a match-up against Eastern Washington at 7 p.m. on Aug. 21. The Alumni Association will put on a tailgate for the contest, with Rudy’s Barbeque providing food while supplies last. There will be 10 non-conference contests (six at home and four on the road) before the Orange and Blue tackle league action.

UTEP will be looking to continue its recent string of success. The Miners have produced a top-100 RPI rating in five of the past six years and 10 times total under Cross. They have also achieved a ranking in the NSCAA Central Region top-10 poll for 10 of the past 11 campaigns.