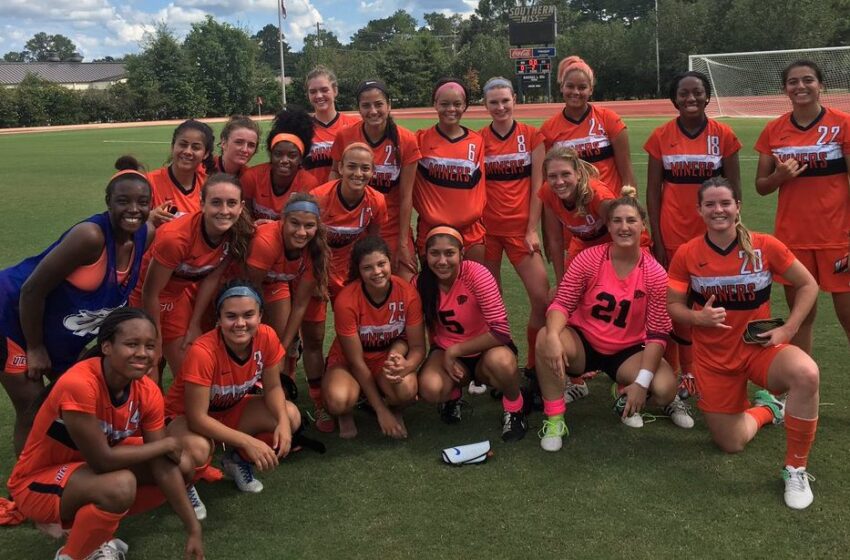 HATTIESBURG, Ms.- Kennadie Chaudhary (90’) scored a goal off a feed from Lauren Crenshaw with 59 seconds remaining in regulation to lift the UTEP soccer team to an exhilarating 1-0 win at Southern Miss in the Conference USA opener for both schools Sunday afternoon.

Alyssa Palacios was credited with six saves for the Miners (5-5), who have now won five consecutive matches. Lady Eagles (6-3) netminder Kelly Brahmbhatt finished with seven saves in the losing effort.

“Alyssa Palacios was phenomenal today and made some huge saves including a one versus one save,” UTEP head coach Kevin Cross said. “We picked up our game in the second half. The team really pushed to get the goal at the end because we have been in these situations many times before this season, and did not want to go to overtime. Lauren Crenshaw made a great attack and assist for Kennadie Chaudhary to hammer it home. I am very proud of our team to get such a big win versus the best Southern Miss team we have played. I urge our UTEP Soccer fans to come out on Friday night when we finally get to play UAB at home. Our girls really feed off our crowd’s support.”

UTEP pressured early on, getting a shot form Jackie Soto but Brahmbhatt was up to the task. A minute later Crenshaw fired wide.

In the 12th minute Southern Miss earned back-to-back corner kicks but UTEP did well to stave off the situation. UTEP generated a chance in the 22nd minute off a corner kick sending a good service into the box to set up Vic Bohdan. She fired it on target but Brahmbhatt made a good play to record the save.

In the 26th minute the Miners forced Brahmbhatt into making her third save of the match with April Pate testing her. The Lady Eagles then launched a counter attack but Palacios easily turned away the shot from Katie Richmond for the save. Palacios then came up with a great save in the 32nd minute against Kierstine Bradley in a one-vs.-one situation to keep the match scoreless.

Back-and-forth play continued into the 40th minute with both teams firing up shots on goal but each GK was able to deliver the save. Palacios then came through again in the 42nd minute with a huge save on a shot by Hannah Abrams.

Early in the second half a promising sequence was wiped out on an offside call against the Miners.

USM had a golden opportunity in the 55th minute but Stephanie Garcia’s shot hit the post. In the scramble UTEP knocked it over the end line for a corner kick and then blocked Garcia’s shot. In the 69th minute Palacios turned away Bradley.

UTEP then went back on the offensive with Devyn Hunley testing Brahmbhatt, who was up to the task in the 73rd minute. Two minutes later it was Natalie Valentine attacking. The shot was saved and the rebound came to Soto but Brahmbhatt was able to come up with it.

With the match seemingly heading toward overtime Crenshaw sent the ball to Chaudhary who bested Brahmbhatt to put the Miners on the board with less than a minute to play in regulation.

USM was stunned and didn’t even manage a shot in the final 59 seconds as UTEP emerged victorious.

Op-Ed: Enforcing America’s laws at the border is...

Op-Ed: Enforcing America’s laws at the border is...