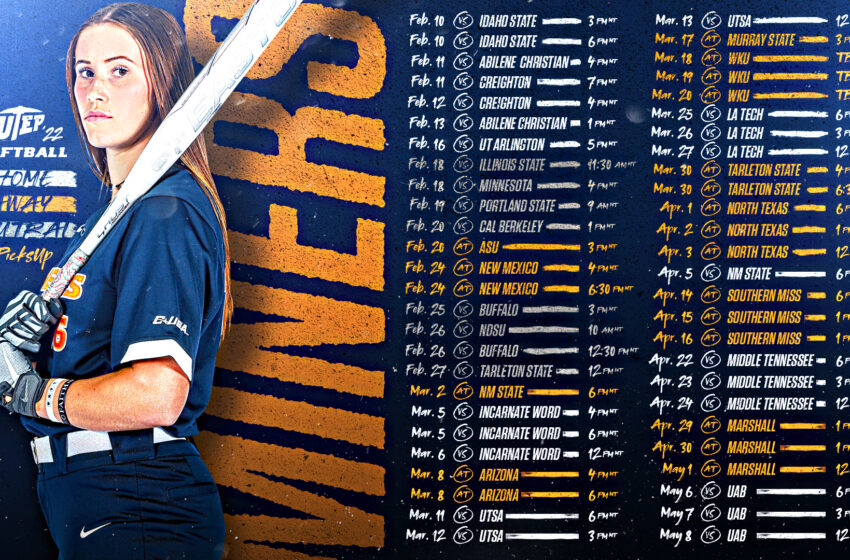 UTEP Head Coach T.J. Hubbard announced the teams’ 2022 schedule Friday as he enters his third year with the program.

UTEP Head Coach T.J. Hubbard announced the teams’ 2022 schedule Friday as he enters his third year with the program.

The Miners will kick off the season on Feb. 10-13 as they host Abilene Christian, Idaho State, and Creighton in the 2022 UTEP Invitational. UTEP will open the new campaign against Idaho State in a doubleheader on Thursday, Feb. 10 at 3 and 6 p.m. MT. UTEP will play in six games during the first weekend.

UTEP will host 11 of its 28 nonconference games. The campaign will participate in two additional tournaments, the Littlewood Classic (Feb. 18-20) and the Lobo Classic (Feb. 24-27). The Battle of I-10 rivalry will be renewed when the Miners play at NM State on March 2 (6 p.m. MT), and will then host the Aggies on April 5 (6 p.m. MT). UTEP will also host UT-Arlington on Feb. 16, and Incarnate Word March 5-6 in a three-game set.

The Miners will host four of its eight Conference USA opponents this season. Conference play will begin on March 11 when UTSA comes to town for a three-game series. UTEP will also welcome Louisiana Tech (March 25-27) and Middle Tennessee (April 22-24) before closing out league play against UAB (May 6-8) at the Helen of Troy Softball Complex.

Tickets will go on sale Monday, January 10, and can be purchased through the Eisenberg Family Ticket Office by calling (915) 747-UTEP, emailing tickets@utep.edu, visiting www.UTEPMiners.com/Tickets or in person at 201 Glory Road (Brumbelow Building, UTEP Campus, Monday thru Friday from 8 a.m. to 5 p.m.