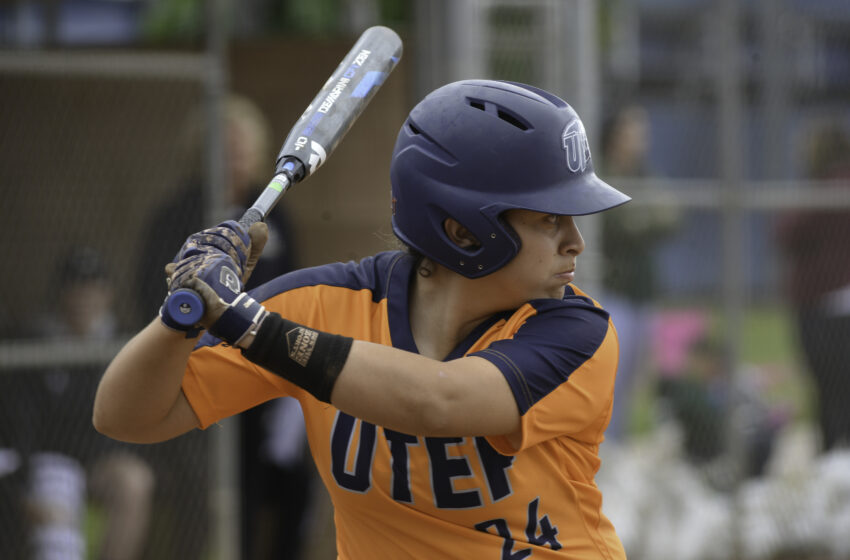 The UTEP softball team will return to the Helen of Troy Softball Complex to open up Conference USA play versus Charlotte in a three-game series this weekend.

The Miners will begin the weekend with a double header against the 49ers on Saturday March 9 (1 p.m. & 3:30 p.m. MT). UTEP will conclude the first weekend of conference play on Sunday (12 p.m. MT) in the final game of the series.

This will mark the first home action of the season for the Orange and Blue after a 20-game road trip to start the 2019 campaign.

HOME SWEET HOME
The Miners are finally making their home debut after spending 20 games on the road to begin the season. Last year, UTEP went 15-8 at home and holds a 52-41 record at home since head coach Tobin Echo-Hawk has taken the lead of the program.  The Miners logged 6,120 miles of travel before Conference USA play begins.

THE SUN CITY BOMBERS
UTEP’s Kacey Duffield, Kasey Flores and Cortney Smith combined for 16 home runs, 43 RBI, 55 hits and a .350 batting average after the first month of play for the Orange and Blue. The trio of bats in the Miner lineup have been a problem for opposing pitching staffs.

In the first game of the season versus Creighton (Feb. 8), the three sluggers made their presence known, with Smith and Flores smacking two homers each and Duffield adding another. Smith and Flores are the first pair of teammates to record two home runs in the same game since 2006 when three Miners did it against NM State in 2006 (Amber Bennett, Amber Camancho and Ashley Perez).

Duffield (.735) and Flores (.727) rank fifth and sixth in slugging percentage for Conference USA, respectively. The long ball will be a major weapon for the Miners as the season progresses.

GOOD EYE
You can count on Kacey Duffield to get on base like you can count on the sun to rise over El Paso. The first baseman has reached base in all 19 of the UTEP’s 20 games this season for UTEP. Her stellar batting average of .408 is a good reason why as she has tallied 20 hits on the season.

However, her eye at the plate is the biggest reason why she has been a staple on the base paths. The senior has drawn 15 walks, which ranks second in C-USA and is tied for fifth nationally. She also boasts the second highest on-base percentage (.547) in the league. Duffield will continue to be seen on bases this season if she can maintain the discipline at the plate.

DUFFIELD IN THE BOX
Senior Kacey Duffield provided a reliable bat for head coach Tobin Echo-Hawk’s offense. She is batting .408 with 20 hits, five home runs and 11 RBIs. Her five dingers were no doubters when they left the senior’s bat. Duffield has reached base safely in all 19 of the Miners’ 20 games this season. The first baseman has logged 109 putouts with one error and seven assists.

AMONG THE GREATS
The table below shows where Kasey Flores’s numbers rank among the top four best 18-game starts to a career. The names alongside Flores should look familiar, as they are three of the best players to ever don the Orange and Blue. Stacie Townsend is the best pitcher in UTEP history and was no slouch in the batter’s box either.

Camilla Carrera is the only All-American in Miner history, and led the country in home runs (32) and slugging percentage (1.199) in 2012. Chelsea Troupe was Conference USA Freshman of the year in 2009, and a two-time C-USA All-Conference first team selection. These three legends rank in the top three spots in on-base percentage, home runs and RBIs in UTEP history.

In her first collegiate game, Flores had two home runs, one single and seven RBIs. Her RBI total for the game is tied for the second most in UTEP history and is the most in a debut by a Miner.

FRESHMAN ON TOP
Kasey Flores is the second highest-ranking freshman slugging percentage (.727, minimum 50 at-bats) in the nation. The freshman also rates tied for third in total bases (40), fourth in home runs (5) and fifth in hits (22) amongst college newbies across the country.

Flores is the highest ranking-freshman in C-USA in batting average, hits, runs scored, slugging percentage and total bases. She is also the second-highest rated freshman in on-base percentage in the league.

CORT IS IN SESSION
Senior Cortney Smith started her final season with a bang. In her first at-bat versus Creighton (Feb. 8), she hit a two-run bomb into deep right field. In the next inning, Smith went yard again tacking on another three runs to her RBI total (five) for the day.

The senior, after the first month of play, is posting a league high six home runs and 14 RBIs

CATCH ME IF YOU CAN
Senior Ariel Blair is the second player in program history to lead the team in stolen bases for three consecutive seasons (2016-2018). If she were to top the squad for a fourth straight year Blair would be the first Miner to ever accomplish the feat. Last season, she went a perfect 10-10 in stolen base attempts, which tied for the highest success rate in a season (Chelsea Troupe 2011 11-11). The outfielder currently has 18 base swipes in her career and only needs five to become fifth all-time in the Miner record books.

UTEP will travel to Denton, Texas, to take on North Texas in the second weekend of conference play in a three game series (March 16-17).

Tickets are $5 for adults and $3 for kids. For more information about the team day program call the UTEP marketing department at (915) 747-6065