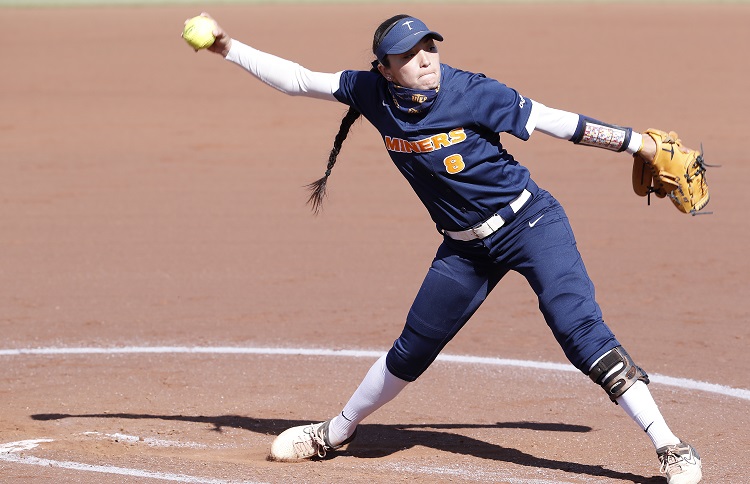 RUSTON, La. – UTEP Softball (9-21, 4-10 C-USA) concluded its day one double-header versus Louisiana Tech (16-24, 5-5 C-USA) with a two-hit shutout behind the arms of redshirt sophomore Isabella Kelly and sophomore Zaylie Calderon in a 1-0 victory at Dr. Billy Bundrick Field Sunday evening. The Miners lost game one by a score of 6-4.

“(Kelly) really came back in game two and was doing a good job of commanding the strike zone and getting ground balls like we asked her to do,” head coach TJ Hubbard said. “And then (Calderon) came in and shut the door on (LA Tech). (They were) a fantastic duo from a pitching standpoint.”

Kelly and Calderon’s performance marked UTEP’s first shutout since Feb. 15, 2020, when it defeated Idaho State, 2-0, and first shutout in conference play since their 8-0 victory over Florida Atlantic on August 19. It was also the first time the Miners held a team to two hits since their combined no-hitter against New Mexico on February 17, 2018.

The Miners opened the game with a three-hit first inning that gave them a one-run lead off an RBI infield single from junior infielder Pate Cathey – her 15th RBI of the season.

Kelly started in the circle for both games of the double-header, and through three innings in game one, she held the Lady Techsters scoreless with two hits. The UTEP lineup provided Kelly with two insurance runs in the top half of the fourth inning coming from a RBI double off the bat of Calderon – her second RBI of the season – and an RBI single from freshman infielder Lexi Morales the next at-bat.

LA Tech denied Kelly of a shutdown inning with a leadoff homer to right field. A single and a sacrifice bunt later, another Lady Techster recorded an extra-base hit, this time and RBI double down the right field line.

Calderon entered in relief for Kelly with one out and allowed the first two batters she faced on base with a walk and an infield single. LA Tech ended the fourth inning with a sacrifice fly to even the score, 3-3.

The Miners regained the lead in the sixth inning after freshman outfielder Aaliyah Rebolledo recorded the first hit of her career with a dribbler to third base. Redshirt sophomore outfielder Idalis Mendez knocked her in with a single up the middle for her first RBI in ten games.

The Lady Techsters answered the Miners’ scoring output again in the bottom half with a three-run shot that gave LA Tech the lead for good, 6-4.

Hubbard sent Kelly out to the circle once more to start game two.

“I felt like (Kelly) did a pretty good job in the first game,” Hubbard said. “We just had to navigate around the strike zone the way it was set up with the home plate umpire. … I felt like that was the best option for us going back-to-back with her.”

Kelly worked through the LA Tech lineup with ease, not allowing a hit until midway through the fifth inning. She finished her outing with five shutout frames and eight total on the day.

Eleven of the 16 outs she recorded were ground balls and another two were strikeouts.

However, the Miners weren’t having much better luck against LA Tech’s starting pitcher Bre Hernandez, holding UTEP to just two hits as well in her seven-strikeout complete game.

The Miners strung together three baserunners in the fifth inning: a hit-by-pitch from fifth-year infielder Bryana Molina, a Cathey single and a walk from senior infielder Ariana Valles. With two outs, Calderon fell into an 0-2 count and worked a walk to bring home UTEP’s only run.

One run was all they would need.

“I felt like the way (Kelly) was throwing today, if we could just get one across, we could probably hold onto it,” Hubbard said.

Kelly tossed 1.1 more innings before Calderon entered the game and shut the door on five of the last seven LA Tech batters of the game for her fourth save of the season.

Next up, UTEP softball is in position to take its first C-USA series of the season in tomorrow’s double-header versus Louisiana Tech at 2 p.m. and 4 p.m. MT.

“If we want to be able to continue to be in a spot to go to the tournament, we’re going to have to be ready to go,” Hubbard said. “I like what we did in game two, and if we’re able to string a couple more hits together for separation on the scoreboard, I think we’ll be in good shape tomorrow.”