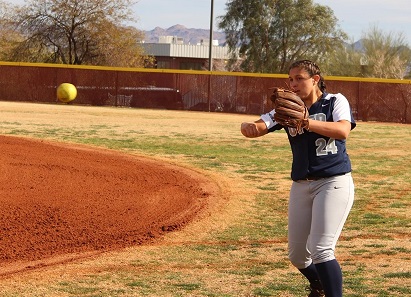 Game One
The Miners got off to a hot start with RBI singles from Kacey Duffield and Kira McKechnie, and a wild pitch that scored a run to give the early edge to UTEP, 3-0.

The Wildcats would answer scoring two runs in the first and second innings to reclaim the lead, 4-3.

A leadoff double from McKechnie got things going for the Miners in the top of the fourth inning. Ilena Santos would eventually drive in Pamala Baber, who pinch ran for McKechnie. With two runners on base for senior Cortney Smith, she blasted her fourth home run of the season over the right field fence for three runs and a Miner lead, 7-4.

Freshman Nadya Orozco entered the game in relief in the circle in the bottom of the fourth inning. She allowed the first three batters of the inning to reach base, but recovered to get out of the inning with no damage.

The Orange and Blue utilized an epic fifth inning that sealed the victory for the Sun City travelers. A Kasey Flores grand slam, Ariana Valles’s first homer of her career and 10 runs later the Miners saw themselves in the driver seat, 17-4, entering the bottom of the fifth inning. UTEP strung together seven hits that gave their pitching staff more than enough room to breathe.

Orozco closed out the game for the Miners and sealed the victory, 17-5. McKechnie (1-1), who struck out five in 3.0 innings of work, received the victory, as the Miners’ 17 runs are tied for sixth most during a single game. The runs are also tied for most during the Tobin Echo-Hawk era, as UTEP scored 17 runs on Feb. 24, 2018 against Portland State.

Game Two
The Miners fell behind early to Hawaii, 2-0, after the top half of the first inning. UTEP threatened as Cortney Smith and Kacey Duffield both registered two-out singles. The two seniors were left on base, but the early offense was a good sign for the Miners.

Hawaii would add four runs to extend its lead to 6-0, heading to the bottom half second inning.

In the bottom of the second frame, Ilena Santos got on base with a well-hit double. Then senior Linda Garcia hit a bomb into deep center field to cut into Hawaii’s lead, 6-2. It was Garcia’s first home run of the season, and the 12th for UTEP as a team this season.

The Orange and Blue failed to get any more runs across the plate as they fell, 12-2, in five innings.

>> Ariana Valles hit the first home run of her career

>> Linda Garcia hit the first homer of her senior season

Up next, UTEP Softball will tackle the second day of the Boyd Rebel Gaming Classic Saturday, against UC Davis (9 a.m. MT) and BYU (11 a.m. MT).