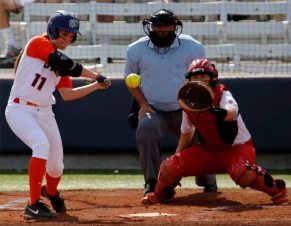 The UTEP softball team was victorious in three contests this weekend, defeating Sul Ross 10-3 on Saturday and sweeping a pair games against Eastern Arizona 6-2 in game one and 12-4 in game two on Sunday at the Helen of Troy Softball Complex.

Kaitlin Fifield registered seven Ks in five innings during the game one win over Eastern Arizona. Erika Harrawood chipped in with a pair of strikeouts. Kiki Pepi, Taylor Sargent and Cortney Smith each recorded an RBI

Kaitlin Ryder tallied five RBI during the game two victory over Eastern Arizona, while connecting on a two-run home run and a three-run double to center. Kawehiokalani Netane and Pepi each recorded an RBI, while Sargent tallied a pair of RBI.

During yesterday’s win over Sul Ross, Smith hit a solo home run, while Ryder, Jade Rodriguez, Hope Moreno and Sargent each tallied an RBI. Ariel Blair chipped in with a stolen base. Danielle Pearson finished the game in the circle, while scoring a pair of runs.

UTEP and El Paso Community College played four innings on Saturday before the game was called due to inclement weather. Smith, however, did connect on a solo shot over the right field fence.

The Miners will conclude the fall season with a game against Midland on Oct. 9 at 4 p.m. and NM State on Oct. 11 at 3 p.m. Both games will be free admission.