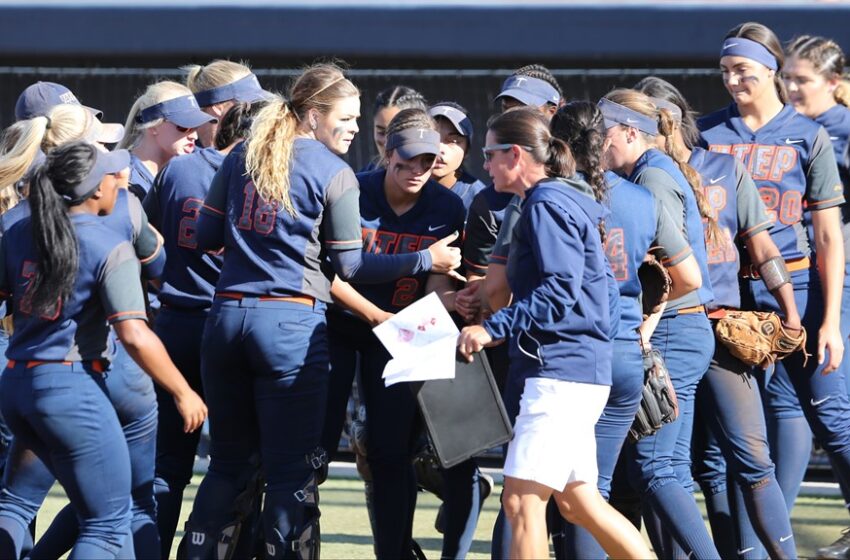 UTEP and Middle Tennessee boast the league’s top offenses as are both vying for a spot in the C-USA Softball Championship May 9-12. The top three teams from each division will advance to the postseason tournament in Charlotte, N.C., while the next two teams with the best record/winning percentage will round out the tournament.

The Miners, after a series sweep against North Texas April 14-15 and winning six of their last nine league games, are sitting in ninth place with Southern Miss (7-11). WKU (9-9) and Middle Tennessee (8-9) are currently placed in the seven and eight spots, respectively.

MT ranks no. 1 in hitting (.301), while UTEP ranks no. 2 with a .286 batting average. The Miners and Blue Raiders’ offenses, overall in C-USA, each rank in the top five in 11 of 21 total offensive categories. UTEP and MT are two of four league schools hitting over .280 on the season.

UTEP, during a bye weekend in league play, is coming off a pair of non-conference losses to SEC school Ole Miss April 20-21, but had won its last four contests, including a 7-0 win against New Mexico April 16.

The Miners are led by All-C-USA hopeful Courtney Clayton, who ranks second in C-USA behind LA Tech’s Morgan Turkoly with a .410 batting average. Clayton’s 59 hits rank fourth in C-USA, while it surpassed her 50 hits from last season. Clayton ranks second in total bases (101), ranks third in doubles (13) and ranks second in triples (four).

UTEP is making its second ever trip to Murfreesboro, Tenn., while it marks the final regular-season road trip of 2018. The Orange and Blue will close the regular season with five home consecutive home games, as a doubleheader against Texas Tech was recently added to the schedule on May 3. The Miners will host LA Tech during Senior Weekend May 5-6.

Taylor Sargent went 2-for-3 with two runs. UTEP, after registering 13 hits, overcame a MT five-run first inning and won game three to clinch the series victory. The Miners would eventually take a 10-5 lead after scoring a trio of runs in the fourth inning. MT put up another two runs in the fifth. Baber went 2-for-4 with two RBI and a run.

The Blue Raiders improved to 31-18 overall after a 3-1 victory at Tennessee State on April 25. Middle Tennessee, after splitting a two-game series against Florida Atlantic April 21, is 8-9 in Conference USA action and sits in eighth place in the overall league standings. The Owls and Blue Raiders didn’t play the third game of the series due to rain.

The Blue Raiders lead C-USA in batting average (.301) and hits (383), while ranking in the top five in multiple offensive categories. MT also ranks 33rd nationally with its .301 average. Summer Burgess leads MT with a .368 average (60-163), while ranking 13th in C-USA, and ranks second on the team with 18 stolen bases.

MT has stolen 78 bases – ranked fourth in C-USA – as Precious Birdsong (.348 avg.) leads the team and ranks tied for fourth in C-USA with 24 stolen bags (27 att.), while also leading MT with 39 runs scored. Lexi Cushing ranks second in C-USA with her school record 12 home runs. Cushing broke the program’s single-season mark with her 11th dinger hit against FAU. Cushing also leads the team with 40 RBI, which is also tied for the league lead.