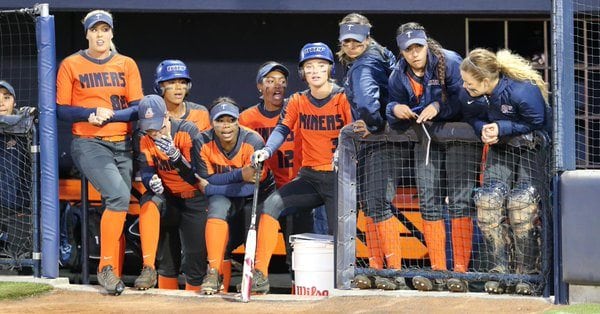 Pamala Baber recorded a career-high four RBI as UTEP shutout Idaho State, 9-0, during a run-rule win in the which the contest lasted only an hour and 10 minutes, and Courtney Clayton tallied three RBI, three runs and a home run during the Miners’ 17-4 trouncing of Portland State on a chilly Saturday at the Helen of Troy Softball Complex.

“We talked yesterday about how we need to be better hitters; I think they showed up today and focused on the things that they needed to do,” fifth-year UTEP head coach Tobin Echo-Hawk said. “They were calm in the box, trusted their fundamentals and they did a good job placing timely hit and key pinch hits.”

The Miners are 8-7 to start the campaign and 7-1 during their last eight contests. The 2011 season was the last time UTEP posted a winning record (9-6) in its first 15 contests. The four-game winning streak is also the longest since winning five in a row (March 25-April 2) in 2016.

The Miners took care of business fast, scoring a run in the second, six in the third and two more during the fourth frame.

UTEP tallied eight hits, led by Baber’s 2-for-2 outing and Kaitlin Ryder’s 2-for-3 performance. Kacey Duffield put the Miners on the board with a one-run single to the shortstop, plating Cortney Smith who was hit by a pitch to lead off the second inning.

With the bases loaded, Baber blew the game open with a base-clearing double, her second double of the season, while Sargent, Ellis and Valles each recorded an RBI to put the Miners up 7-0. The fourth inning saw Ryder lead off with a triple and Clayton get hit by a pitch to put runners at the corners.

Cortney Smith drove home Ryder with her second double of the season and Baber registered her career-best fourth RBI on a sac-fly hit to center, plating Clayton.

Kira McKechnie (4-2) got her fifth start of the season, hurling 77 pitches in 5.0 innings of work, walking one and striking out two. The junior transfer picked up her staff-leading fourth victory.

Clayton, Ryder and Smith each crossed the dish two times.

The Miners pounded out 15 hits on their way to 17 runs, the most during the Echo-Hawk era. UTEP scored 10 runs on eight hits during the big second frame during the evening contest.

The second inning was highlighted by a Linda Garcia two-run home run – her first since May 1, 2016 – after missing all of 2017 with an injury. Taylor Sargent also cleared the bases with a three-run double. Taylor’s three RBI tied her career best.

Freshman Brianna Hill recorded her first collegiate and RBI – a triple that scored a pair of runs in the fourth inning. Jordyn Quevedo was hit by a pitch during the fourth and found her way home for her third run of her freshman season.

“We see [the new players] in practice all time and they do great,” Echo-Hawk said. “It’s just giving them an opportunity and them making the most of the opportunity. It’s good to see them take advantage of these opportunities.”

Clayton finished the second contest with a 2-for-2 outing, while crossing home plate three times and tallying three RBI. Valles, Garcia, Baber and Hill each registered two RBI. Mariah Ellis and Ryder each recorded an RBI.

Julia Wright (2-2) looked impressive as she earned her second victory of 2018. The junior transfer threw 3.0 frames, striking out a career-high seven batters and only walking two. Wright recorded 20 K’s in her last 13.0 innings pitched. McKechnie also made her into the circle, walking none and striking out three.

UTEP will look to finish the weekend undefeated as it hosts Portland State at 12:30 p.m. to close out the 2018 UTEP Tournament. The Miners will then travel to Hawai’i to play six contests March 1-4.