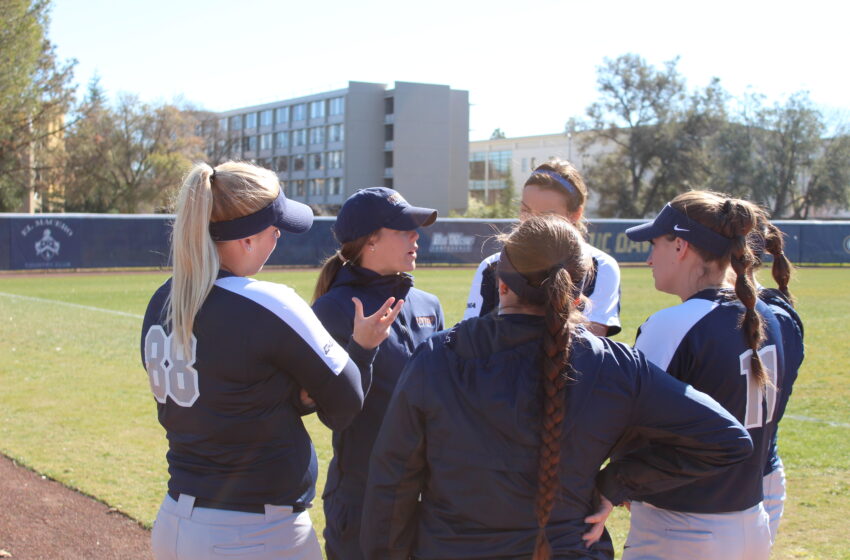 RIVERSIDE, Ca. – The UTEP Softball team (4-12) rallied from 7-2 down to defeat UC Riverside, 8-7, in the second game of the day. The Miners fell to Cal Baptist, 4-0, in the earlier contest on Friday morning.

The Miners erased a five run deficit to defeat the hosts of the UCR Classic, 8-7. Sophomore Ariana Valles had a career day with three doubles in the game with five RBIs, including the game winning three-run double in the sixth inning.

Pate Cathey reached base in all eight of her plate appearances on the day with three walks and three hits, including the first home run of her career. Lindsey Sokoloski posted two multi-hit games on the day, extending her multi-hit streak to four games.

Game One
Sokoloski led the way for UTEP with two hits, her third multi-hit game in a row and Cathey reached base in all four of her trips to the plate. Pamala Baber and Bryanna Molina both were very opportunistic at the plate, recording pinch-hit singles when called upon. Despite their efforts, CBU jumped out to an early lead and never looked back.

The Lancers, through the first three innings of play, registered nine base runners, scoring three to take the lead over the Miners, 3-0.

The UTEP offense saw Mallorie Cross and Sokoloski register hits in the early going, but the other bats in the lineup were held in check.

In the bottom of the fifth inning with two outs, Sokoloski posted her second hit of the day, and then Kasey Flores singled with Cortney Smith up to the plate. But the senior was unable to continue the rally as UTEP still faced the three-run deficit.

In the next opportunity for UTEP’s bats, Cathey reached base on a single and Baber recorded a pinch-hit single to keep the inning alive. However, the runners would stay stranded on the bases.

CBU would add another run to their lead in the top of the seventh, 4-0. Pinch-hitter Bryanna Molina led off the bottom of the seventh frame with a single, but no other Miner could follow up with a hit.

Game Two
The Miners fought off a five-run deficit behind the bats of Valles and Sokoloski who both recorded three hits each. Valles posted career highs in doubles (three) and RBIs (five) to lead the way. Junior Allie Johnson was stellar when she came in the game, pitching 3.1 innings and earning the victory. Cathey hit the first dinger of her career and reached base in all four plate appearances.

The Miners showed their patience early in the first inning, drawing two walks to lead off the contest. Cathey came to the plate and hit a screamer to shortstop for a base hit to load the bases with two outs. UTEP couldn’t finish the job though, leaving all three on base.

The Orange and Blue wouldn’t waste the opportunity in the second frame. Ilena Santos led off the inning with a single to right center field, and then Linda Garcia advanced the sophomore into scoring position with a sacrifice bunt. With two outs and the scorching Sokoloski’s hot bat, UTEP scored its first run of the day after she hit a blooper into left field for a 1-0 advantage.

Cathey joined the UTEP dinger club, blasting the first of her career into deep left center field to make the count 2-0.

The Highlanders would claim the lead in the bottom of the third, scoring three runs on three hits to go up 3-2. Then their bats exploded for four runs in the fourth frame to take a five-run lead (7-2).

The Fighting Miners showed they were not going to lie down for the Highlanders in the top of the fifth inning. Smith and Cathey both drew walks, starting a fire for UTEP. Valles stepped to the plate and hit a rocket over the right fielder’s head, scoring two runs and placing her on second base. Garcia promptly hit a single right up the middle to score the second baseman to cut into the CBU lead, 7-5.

Allie Johnson entered the game for the Miners and held it down in the circle, going three up three down in the bottom of the fifth.

Sokoloski racked up her third hit of the day on a double to right center to lead off the sixth inning for the Miners. Sokoloski would advance to third on a wild pitch, and then Flores reached base on a walk. Cathey then drew her second walk of the game to load the bases. Valles capped off the rally when she came to the plate and crushed her third double of the game to right field, scoring three runs to reclaim the lead for UTEP, 8-7.

Johnson (1-1) came through again in the sixth and the seventh to earn the win in the circle for UTEP. Johnson sat down eight consecutive batters at one point in her outing.

>> Valles’s three doubles in a game is a career high for her, and she is only the third Miner to ever accomplish the feat

>> Cathey hit the first dinger of her career

On deck, the Miners will play Cal Baptist Saturday morning (10 a.m. MT) on the second day of the UCR Classic.