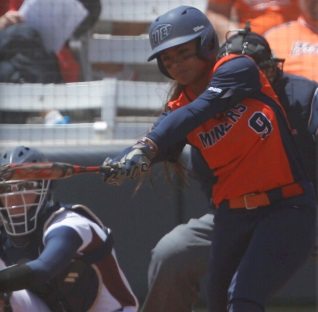 “After such a successful junior year, we are extremely excited to see what she accomplishes this season,” third-year head coach Tobin Echo-Hawk said. “She had been a tremendous leader on and off the field. Kawehi’s hard work and dedication to the program has helped the team go in the right direction.”

After producing a breakout junior season in 2015, Netane earned a spot on the All-C-USA first team after establishing career highs down the stat line.

She recorded a team and season-high of reaching base in 15 consecutive games from Feb. 22-March 14. Netane hit .476 (20-for-42) with four jacks, 15 RBI and nine walks during that span. Netane also earned C-USA Player of the Week on April 13.

The 2016 season will open in the Sun City for the first time since the 2012 campaign, as UTEP will host Incarnate Word on Feb. 11 in a doubleheader starting at 3 p.m. The Miners will then travel to Las Cruces to compete at the NM State Invitational against Incarnate Word (1 p.m.) and NM State (3 p.m.) on Feb. 13.

The Miners will close the weekend against the rival Aggies on Valentine’s Day (10:30 a.m.).

IF – Emily Lochten, Florida Atlantic, So.

IF – Elicia D’Orazio, Marshall, So.

OF – Kendall Burton, UTSA, So.

2016 Preseason Player of the Year

2016 Preseason Pitcher of the Year