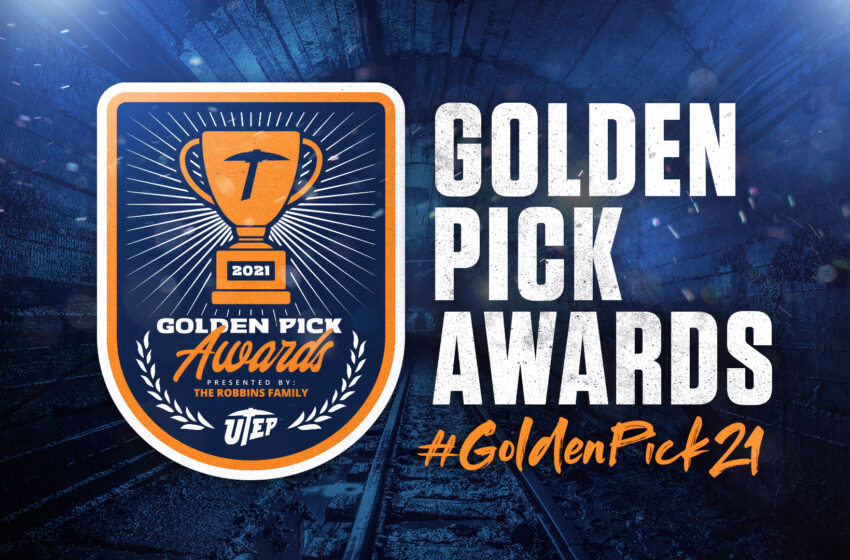 UTEP student-athletes and teams were honored at the 2021 Golden Pick Awards on Monday at the Don Haskins Center. A list of the major award winners and a brief summation of their accomplishments follows below.

“Our student-athletes make us proud, and we hope that they are proud of each other,” UTEP Director of Athletics Jim Senter said. “We’ve had a lot of adversity and a lot of challenges, but we’re better because of it. Congratulations to all of our award winners.”

The end-of-the-year “Academy Awards”-style show highlighted all the academic and athletic accomplishments of UTEP student-athletes for the past year.

Gallegos was a first team All-Conference USA selection after leading the Miners into the semifinals of the C-USA tournament for the first time in five years. She started all 25 games, filling up the stat sheet with 13.8 ppg, 4.5 rpg and 5.0 apg.

Bailey was first team All-Conference USA in the 400m and 4x400m relay indoors in 2020. He has continued to be a dominant force in the 200m and 400m outdoors in 2021, and has also helped the UTEP relay units to three titles this spring.

Team of the Year – Volleyball

In Ben Wallis’s second year as head coach, UTEP secured its first winning season since 2012 as well as winning its first conference tournament match since 2008 as a No. 2 seed – its highest seeding since 1984. Additionally, the Miners finished 8-4 in the league for their highest winning percentage in conference play since 1985.

Koncos was diagnosed with stage 2 lymphoma. He spent the fall undergoing chemo, and the spring undergoing radiation treatments. He has continued to throw the hammer for the Miners this spring, and he is now cancer free.

Verhoeven has never been concerned with individual statistics, but has been a vital player for the Miners. He started all 24 games for the Miners in 2020-21. He led the team with 21 blocked shots and ranked third on the squad in rebounding, averaging 4.4 boards per game.

Tamez started all 10 of 11 games, leading the team in minutes played. She was an All-Conference USA member, in addition to landing on the C-USA All-Freshman team. She connected on 82 percent of her passes, making nearly 50 per game.

Hankins set the UTEP freshman running records for both yards (592) and touchdowns (nine). He rushed for 84.6 yards per game and topped 100 yards in three games.

Landeros played in 12 sets for the team on the year, tallying five kills and five blocks. Tejada played in all eight games on the season, serving as the starting long snapper.