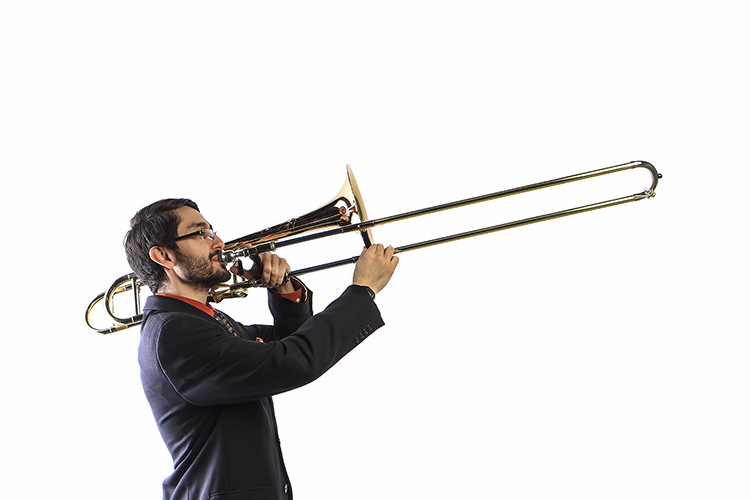 Christopher Terrazas speaks softly and carries a big horn. The UTEP senior music education major said he lets his trombone do most of his talking, and right now people all over the world want to hear what he has to say.

Two major solo trombone competitions have selected Terrazas to participate as a finalist in their 2019 activities. One is during the U.S. Army Band’s American Trombone Workshop March 6-9, at Joint Base Myer-Henderson Hall, Virginia, near Washington, D.C., and the other is the International Trombone Festival from July 10-13 at Ball State University in Muncie, Indiana.

Terrazas, an El Paso native, said the invitations have humbled him. He called them group victories because of the help and support he received from family, faculty and peers. He got his national invite in mid-January and the international one a few weeks later.

“I remember thinking how thankful I was for all the help I had received to get to that point,” the self-described “shy person” said. “My fellow peers were supportive and the faculty were very involved and caring.”

Among the first people he contacted with the news was Steve Wilson, DMA, chair of UTEP’s Department of Music and professor of trombone. He has worked with Terrazas for three years and has seen him mature as a person and as a musician.

“This is a win for (us),” Wilson said. “It shows that music students from El Paso can compete on the highest stage. This is a fantastic opportunity for Chris.”

Wilson described Terrazas as a respectful, helpful and disciplined person who wants to be the best trombonist possible. However, he said his student transforms for performances.

“He’s a warrior,” said Wilson, who rated Terrazas as his best student in 21 years at UTEP. “He really brings out the inner animal in himself through the instrument when it’s appropriate. He’s like Clark Kent and Superman.”

Wilson said he has served as an adjudicator at the national competition on multiple occasions and said organizers only invite the country’s best trombonists to participate. He said these contestants perform with expressive, beautiful sounds that articulate musical details.

Each competitor will play “Colors” by Bert Appermont. The contestants used that same piece for the competition’s preliminary round. The composition lasts approximately 15 minutes and offers numerous technical and musical challenges.

Terrazas started to work on his “Colors” for the preliminary round in late July 2018 and sent in his audio file to the selection committee in early November. His category is second division tenor trombone age 22 and younger. He has continued to fine tune his performance and that drive for perfection will benefit him, Wilson said.

“I think he has a really good shot at winning both contests because he is so consistent at being able to nail the music every time,” Wilson said. “He’s a really good, thinking musician, and he’s performing at a really high level. You can hear the emotion in his playing.”

Terrazas’ journey to this point started about 10 years ago when he first picked up a trombone at East Montana Middle School in east El Paso County. The first-generation college student said he wanted to follow the example of his older brother, Benjamin, who also was a trombonist. He said the instrument’s notes sounded like singing to him. The trombone’s expressive timbre quality immediately captured his imagination. He recalled that even at that young age, he understood music’s power.

“I saw music as a uniting force that could bring people together,” Terrazas said during a break in his hectic schedule that he keeps on a color-coded Excel spreadsheet. He also saw the personal advantages. “I get to express myself the way I want. Music provides me with clarity. It helps me to create my voice. When words fail me, I can speak through my music.”

The 2015 graduate of Mountain View High School said he has participated in other competitions through the years at the local and state levels and has had his share of success, but said they pale in comparison to what is ahead of him. He admitted that he applied to both of these events for the past few years, but he was not selected as a finalist until now.

Terrazas said he was excited to compete at both events because of the numerous concerts and master’s classes that each would provide.

Regardless of the outcome, the UTEP senior will shift his focus to the international competition, where he will perform “Concerto for Trombone” by Ida Gotkovsky during the Robert Marsteller Solo Trombone Competition. There were more than 63 entries for the International Trombone Festival competition. Terrazas will compete against two students from a music conservatory in Hannover, Germany.

The student said that his brother and “trombone hero,” Benjamin, has helped him prepare for both competitions. Benjamin Terrazas Jr. earned his bachelor’s degree in general music with a minor in education from UTEP in 2014. He has been the band director at Armendariz Middle School in El Paso since then.

The brother, who is six years older than Christopher, said that he quickly noted his sibling’s keen ear for music. The younger brother also had a desire to learn and the discipline to practice.

“He was a sponge,” Terrazas Jr. recalled. He said he absorbed all he could from him and their older sister, Basilia, or Betsy, who earned her bachelor’s degree in multidisciplinary studies from UTEP in 2014. She was a singer through high school and currently processes claims for an El Paso insurance company.

“He had the advantage of being able to hear me practice,” Terrazas Jr. said. “He’d hear my mistakes and be able to figure out how to fix things. We’d learn from each other.”

Terrazas Jr. said the family is proud of Christopher and attributes part of his success to the work ethic that their parents instilled in them. The parents, Luz Elena and Benjamin Terrazas, were hard-working immigrants from Chihuahua, Mexico, who did not have much formal education. The father worked on ranches and farms and the mother helped with her family’s small store.

“Christopher has earned this opportunity,” said Terrazas Jr., who still advises his brother on how to deal with performance anxiety. “We wish him the best.”

Christopher Terrazas said he plans to attend graduate school or a music conservatory after UTEP. His goal is to become a better educator and then work at a university or conservatory.

“My love is my trombone,” he said. “I love this instrument. I love to teach (trombone) and to help others to find their love for it.”