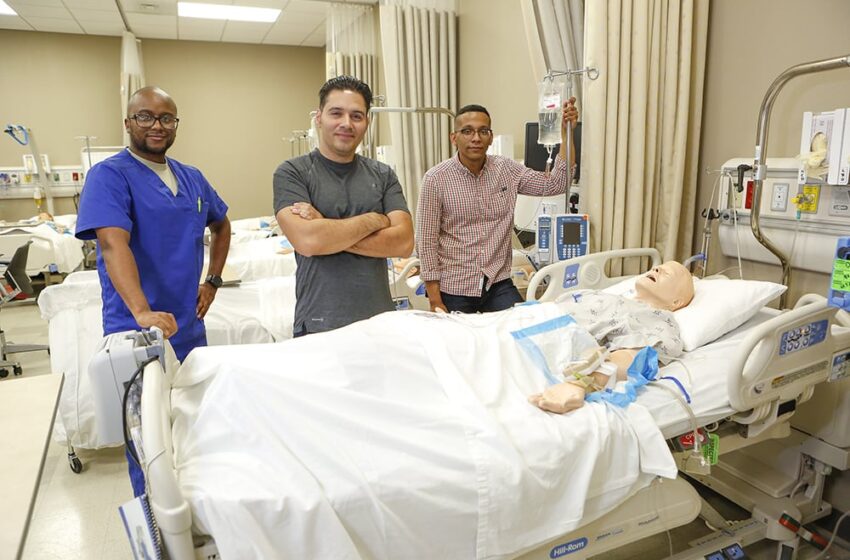 Wesley Stonell was two semesters shy of graduating from The University of Texas at El Paso with a bachelor’s degree in biology when he switched his major to nursing.

Geovany Ruiz delayed entering nursing school because his friends teased him about his childhood dream to become a nurse.

Tabare Faison was a medic in the Texas Air National Guard when he decided to pursue a nursing career.

They are four out of 19 male students who completed UTEP’s Bachelor of Science in Nursing program in August 2018. The University’s School of Nursing honored the program’s 80 graduates Aug. 15 at the Summer Class of 2018 Pinning Ceremony in Magoffin Auditorium.

According to school officials, males make up 21 percent of undergraduate students and 20 percent of graduate students enrolled in UTEP’s School of Nursing. These numbers are higher than the national average of 15 percent for baccalaureate programs and 13 percent for master’s and doctoral nursing degree programs, reported by the National League for Nursing in 2016.

“I am very privileged to be around some of the smartest, most compassionate, hard-working people,” said Stonell, who was president of UTEP’s Texas Nursing Students’ Association and a 21st Century Scholar. “The majority of them are female, but that makes no difference to me. I am proud to be a male nurse and I hope that more male students want to go into nursing … because myself and my male peers have led by example.”

Stonell and his peers are part of a growing number of male nurses in the United States who continue to expand gender diversity in a workforce historically dominated by women. The U.S. Census Bureau estimates that the number of male nurses has tripled since 1970, from 2.7 percent to 9.6 percent.

“We are very proud that our efforts to create a more diverse nursing workforce have resulted in this upward trajectory of recruiting and graduating more male nurses at UTEP,” said School of Nursing Dean Elias Provencio-Vasquez, Ph.D. He was the country’s first Hispanic male to earn a doctorate in nursing and lead a nursing school.

“Our outstanding undergraduate and graduate programs support the development of all nursing professionals who not only provide the highest quality care, but also closely represent the diverse patient populations they serve,” he said.

In “Why the Ratio of Men in Nursing is Growing,” a story published on Nov. 7. 2017, in NursingJobs.com, Elizabeth Munnich, Ph.D., shared some of her research findings on the topic. Munnich, an assistant professor of economics at the University of Louisville in Kentucky, said some of the reasons behind the increase include a greater high school completion rate, additional access to two-year colleges, more urbanization, and a liberalization of gender role attitudes.

Changing attitudes about gender roles prompted Ruiz to pursue his dream to become a nurse. The Puerto Rican native and U.S. Army veteran used his military education benefits to enroll at UTEP.

“In my neighborhood, especially my old friends, they always thought that being a nurse was a job for females,” said Ruiz, who plans to work as an oncology nurse. “So, I put off being a nurse for a long time. But when it comes down to doing the job, it doesn’t matter if you’re male or female. We can both do the job.”

Alexander echoed his classmate’s sentiments. He said men and women go into nursing for the same reason. They want to help people.

Alexander had just graduated from high school when his older brother earned his bachelor’s degree in nursing from UTEP. He wanted to make a difference in people’s lives so he followed his brother’s path to the University to earn a nursing degree.

“We all want to help people,” said Alexander, a member of Sigma Theta Tau International Honor Society of Nursing. “It takes a special person to do this job because we see a lot more than a normal person has seen, and I feel that God has blessed me with this knowledge and skills to do this job.”

While most patients are comfortable with either a man or a woman for a nurse, Faison, who was the only male nursing student in his clinical rotation, said there are times when patients may prefer a nurse that is of their same gender, especially when it comes to treating male and female conditions.

Faison had been a police officer and then a medic in the Texas Air National Guard for 10 years when he decided to expand his scope of practice and become a nurse. He decided to study at UTEP because its School of Nursing has a strong regional reputation, state-of-the-art facilities and an outstanding faculty, he said.

“(As a nurse) society looks at you like someone who can help,” Faison said. “Not every profession is like that where people come to you for help and look up to you. (When I was) in law enforcement, sometimes it was hard to see how I was helping people. Whereas in nursing, especially in the emergency room, everyone that you encounter you’re helping them in some way.”

Jennifer Hernandez, a senior nursing student, agreed that there were not many differences between what male and female nurses could do, but she wished that she had the physical strength of her male counterparts.

“You’ve got to move your patients,” Hernandez said. “You’ve got to turn them and it takes a lot of physical strength and energy, so having that physical ability would be awesome!”