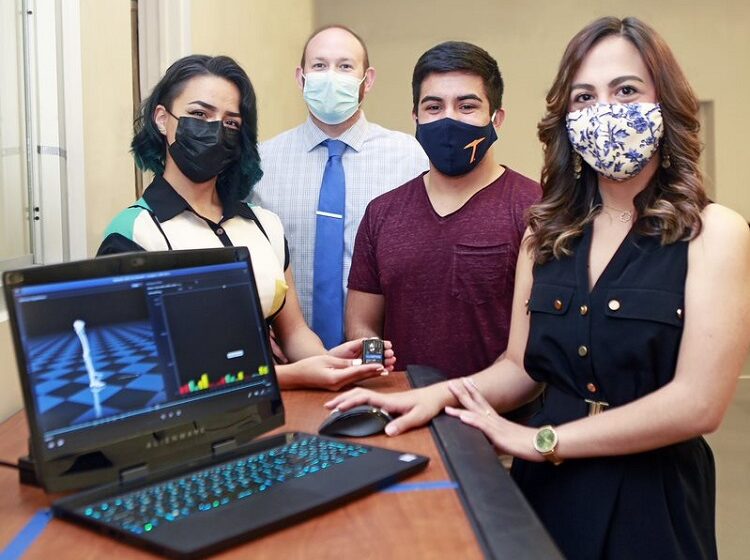 The 18-month UTEP study incorporated live animation biofeedback to teach 15 children who have ASD and were between the ages of 8 and 17 how to do a squat, a strength exercise that works multiple muscle groups in the body’s lower extremities. | Photo courtesy UTEP

For more than a year, researchers at The University of Texas at El Paso’s Stanley E. Fulton Gait Research & Movement Analysis Lab in the College of Health Sciences have been using real-time 3D animation to investigate motor impairments in children who have autism spectrum disorder (ASD).

Their aim is to understand how children with autism can learn motor skills, so that they can receive effective therapies.

The results of their study, titled “Children With Autism Exhibit More Individualized Responses to Live Animation Biofeedback Than Do Typically Developing Children,” were recently published in the journal of Perceptual and Motor Skills. The paper’s release coincides with National Autism Awareness Month in April.

“The greatest takeaway from this study is that when teaching or coaching new movements to an individual with autism, the teacher or coach needs to understand the individual with autism’s specific motor learning characteristics,” said Jeffrey Eggleston, Ph.D., assistant professor of kinesiology and Gait lab director. He is the study’s lead author. “They need to look specifically at each child’s needs because each child is different.”

The study’s other authors include Alyssa N. Olivas, a student in the doctoral biomedical engineering program; Heather R. Vanderhoof and Emily A. Chavez, students in the Interdisciplinary Health Sciences (IHS) doctoral program; Carla Alvarado, M.D., board certified psychiatrist; and Jason B. Boyle, Ph.D., associate professor and interim chair of Kinesiology at UTEP.

More than 80% of children with ASD have gross motor skills issues, such as problems with balance and coordination, which can interfere with their communication and social interactions.

The 18-month UTEP study incorporated live animation biofeedback to teach 15 children who have ASD and were between the ages of 8 and 17 how to do a squat, a strength exercise that works multiple muscle groups in the body’s lower extremities.

Researchers compared their movement patterns to children without the disorder. They found that children with ASD displayed highly individualized responses to the live animation biofeedback, much more so than children with typical development, Eggleston said.

In the lab, children had 1-inch cubes called inertial measurement unit (IMU) sensors strapped to their pelvis, thighs, lower legs and feet. They followed an animation model on a computer screen, which showed them how to squat. The children would then try to perform the squat without looking at the animation.

IMU sensors captured the movement of the child’s lower extremities. The data was relayed to a computer graphics program via Bluetooth, which was transposed into a skeletal animation of the child squatting and then standing back up on the computer screen.

The study, which took place before the COVID-19 pandemic, was funded through a nearly $15,000 grant from the J. Edward and Helen M. C. Stern Foundation and UTEP’s kinesiology department.