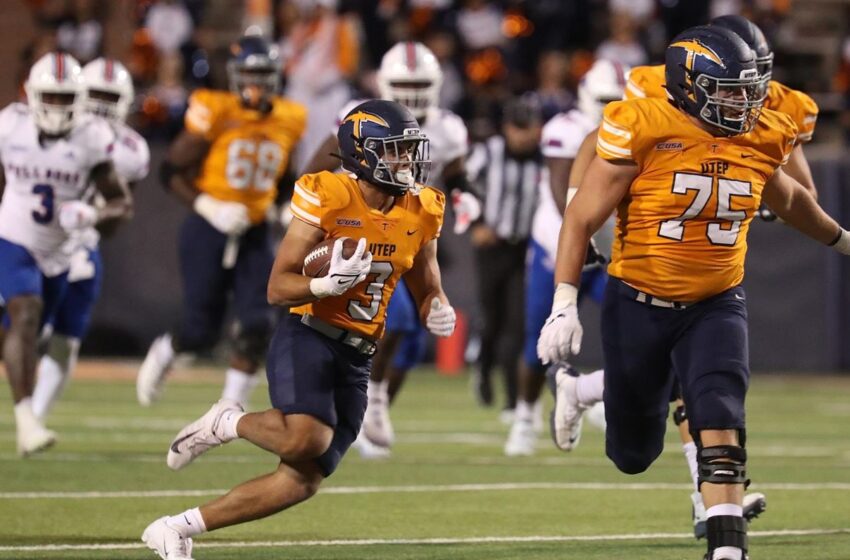 UTEP (6-1, 3-0 Conference USA), which became bowl eligible for the first time in seven seasons, will look to extend its winning streak when the Miners play at Florida Atlantic (4-3, 2-1 C-USA) on Saturday. Kickoff is set for 4 p.m. MT/6 ET at FAU Stadium.

The Miners and Owls can be heard on “The Home of UTEP Football” 600 ESPN El Paso with “The Voice of the Miners” Jon Teicher calling the action, former UTEP quarterback Mike Perez providing analysis and Mando Medina roaming the sidelines. The contest will be streamed on ESPN+.

The Miners’ no. 9-nationally ranked defense is set to face on offense that averages over 30 points per game. The Owls are led by quarterback Univeristy of Miami transfer graduate student N’Kosi Perry, who’s thrown for 14 TD’s, only four interceptions and 1,696 yards on 119-of-194 passing. Johnny Ford leads the rushing attack at 403 yards (6.3 avg.) and three rushing scores. Ford’s also added 10 receptions for 160 yards and two more scores. Senior LB Caliph Brice leads the defense with 53 tackles (24 solo), 3.5 tackles for loss and five QB hurries. He’s added a forced fumble and fumble recovery.

“We’re getting ready for Florida Atlantic. They got to play last Thursday, so they have a little extra time and preparation,” UTEP Head Coach Dana Dimel said. “They had a really good road-win at Charlotte. I thought they played really well in all three aspects of their football team. I’m impressed with their athleticism. As you know, they’re a very athletic team. They have good speed across the board; they’re a typical Florida school, a lot of speed at their skill positions. They have good size and good strength on both sides of the line of scrimmage.”

The Miners last won five in a row during the 2005 season. UTEP will also attempt to win its first game in the Eastern Time Zone (0-25-1 all-time).

The Miners have allowed less than 100 rushing yards in 4 games this season. It’s the first time that’s happened since 2014. If they can do it once more, it would be the most since they did it 5 times in 1967.

MORE ON THE STELLAR D

UTEP has allowed less than 300 total yards in 5 games this season. It’s the first time that’s happened since 1976. If they can do it once more, it would be the most since they did it 8 times in 1966.

The UTEP defense picked off three passes against LA Tech on Oct. 16. It was the first three-interception game for the UTEP defense since 2012 at East Carolina. DB Tyson Wilson, LB Tyrice Knight and DB Torey Richardson each tallied their first career interceptions. All three clutch picks happened during the fourth quarter.

LEADER OF THE PACK

LONG ARMS OF THE WEST

WR Jacob Cowing has recorded five 100-yard receiving games, including four in the last five contests in 2021. It’s the most 100-yard games by a Miner since Kris Adams had five in 2010. Johnnie Lee Higgins Jr. was the last Miner to tally six 100-yard games during a single season (2006).