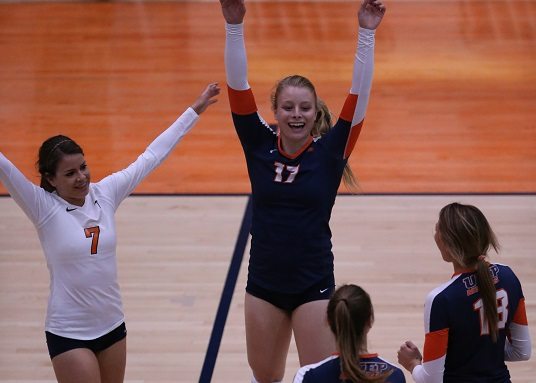 Amanda King and Lindsey Larson aided the offense with a total of 15 and 14 assists, respectively.

On defense, Sarah Villa led the Miners with a total of 12 digs while Niki Cebak followed with eight. Tatum Winter registered a match-high six blocks from the net.

UTEP took control early in the opening frame. The Miners stormed out to take a 5-1 lead and never looked back. Middle Tennessee called a timeout as they trailed, 11-16, but UTEP’s momentum continued through the remainder of the first set. The Orange and Blue claimed the first point of the match with its 25-15 victory in the first.

The Orange and Blue’s confidence was radiating going into the third set as the squad took a 5-1 lead early in the stanza. The Blue Raiders cut UTEP’s lead by two but the Miners responded by going off on a 3-0 run to force Middle Tennessee to call its first timeout of the frame as it trailed 11-16. The Blue Raiders were able to put up six more points against the Miners but it was too late as the Miners claimed the third set, 25-17, and the match 3-0.

The Miners will be hosting three home matches next weekend. Action will begin on Thursday as the squad will host UT-Rio Grande Valley on Thursday, Florida International on Friday and Florida Atlantic on Sunday. All matches will be played in Memorial Gym.