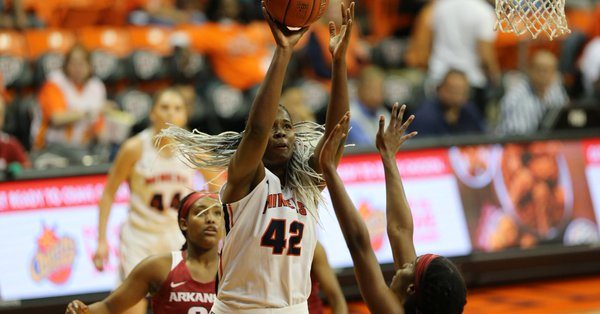 The Miners (3-0) raced out to a 13-2 lead four minutes in, were up 18 (38-20) at half and 16 (52-36) through three quarters before withstanding a furious rally attempt by the Razorbacks (3-2). UA managed to whittle UTEP’s advantage all the way down to one (62-61) but sophomore Faith Cook hit a fadeaway jumper to beat the shot clock with eight seconds left in the game to put the Miners back up by three.

The visitor’s Devin Cosper then misfired on a triple at the other end to send the Miners to their first victory in program history against an SEC opponent. Overall it is UTEP’s initial regular-season victory against a power-five conference foe since it crushed Kansas State, 84-39, on Nov. 16, 2013.

“The first three quarters was just good Miner basketball,” UTEP head coach Kevin Baker said. “I thought we played about as well as we could offensively at times, made some really good decisions. They (Arkansas) is a 3-point shooting team, and we knew that. But we wanted to try, at least, was to make them rely on the three. I couldn’t be more proud of our kids. We learned something today; we learned how to win a tough game. We learned how to take care of the ball late when we had turned the ball over and lost the momentum. I just thought our kids gritted their teeth and decided that we were going to win today. That’s also thanks to our crowd. I thought our crowd was absolutely phenomenal. I’m proud of our fan’s effort today. It was just a great day to be a Miner.”

Senior Tamara Seda notched a double-double (20 points, 10 rebounds) to lead UTEP, but she was buoyed by 14 points and eight rebounds from junior Najala Howell and 10 points and six boards by sophomore Katarina Zec. Freshman point guard Jordan Jenkins did her part with a career-high seven assists while sophomore Zuzanna Puc pitched in eight points and four boards in 15 minutes off the bench in her 2017-18 debut.

The Orange and Blue took care of business on the boards, winning the rebounding battle to the tune of 51-27. Helping that figure was 40 defensive boards, the most against a division I opponent since also securing 40 against Tulane on March 8, 2013.

An area of concern for UTEP was turnovers (23) which led to 22 Arkansas points. But the Orange and Blue compensated for that by the dominance in other areas, in addition to holding a 38-18 advantage in points in the paint.

The Razorbacks were led by Devin Cosper (22 points), which was aided by her drilling 6-13 from distance. Malica Monk (10 points) also reached double figures in scoring but she had entered the game accounting for 21.3 points per game.

UTEP bolted out to a 13-2 lead over the first four minutes of the contest, prompting Arkansas to call timeout. Seda was the dominant factor, accounting for 10 of the points in the stretch.

While the Miners cooled off offensively, they continued to harass the visitors at the other end of the court which allowed them to carry a 15-3 advantage into the second quarter. The three points tied as the fewest points allowed in a quarter by the Orange and Blue in program history. Arkansas was 0-15 from the floor during the first 10 minutes, including 0-9 from distance.

The visitors came out firing to start the second frame, using a triple from Monk and an old-fashioned three-point play quickly whittle the UTEP lead to six (15-9). The margin was seven (22-15) midway through the stanza before Seda scored in the paint and Howell banged home a triple to fuel a mini 5-0 run.

After the Razorbacks cut the Miners’ advantage down to nine (29-20), UTEP struck back with a half-closing 9-0 run to surge into the locker room armed with an 18-point cushion (38-20). Howell scored the first five points of the sequence before Zec finished it off with a jumper and then a pair of free throws with 0.4 seconds left on the clock.

The two teams traded baskets through most of the third quarter, and UTEP looked to be in good shape by holding a 16-point advantage (52-36) heading to the final frame. The margin remained 15 (59-44) with 5:21 to play in the game before Arkansas unleashed an 11-0 run over the next three minutes to get within four (59-55) with 2:57 left in regulation. UTEP made four turnovers in the stretch, and UA also drilled a trio of triples to fuel the run.

Howell reinstated order by draining a long 3-pointer of her own to put the Miners up by seven (62-55) but Arkansas responded by scoring the next six points in the game to get within one. But Cook and company had an answer, allowing UTEP to hold on for the exhilarating victory.

The Miners will have a very quick turnaround as they wrap up play at the Classic by squaring off against Texas Southern at 2:30 p.m. MST Saturday. Tickets are $5 for adults and $3 for kids, which will also grant individuals admission to the first match-up of the day (Arkansas vs. NM State) at 12 p.m.

UTEP (3-0) will wrap up play at the Sixth-Annual UTEP Thanksgiving Classic by squaring off against Texas Southern (1-3) at 2:30 p.m. MST Saturday. The Miners posted a wire-to-wire 64-61 victory vs. Arkansas on the first day of action at the Classic while the Lady Tigers rallied back from 12 points down against NM State for a 66-50 win in their initial contest at the Classic. Tickets are $5 for adults and $3 for kids, which includes admission into Arkansas vs. NM State at 12 p.m. MST Saturday. The Miners’ contest will be broadcast locally on 600 ESPN El Paso, KROD-AM Radio and there will also be a live stream on CUSAtv.com (subscription based).

INSIDE THE UTEP THANKSGIVING CLASSIC

HOME FOR A WHILE

The tilt is the fourth of a season-opening six-game homestand, with New Mexico (5:30 p.m. Nov. 30) and Houston Baptist (1 p.m. Dec. 2) also on the docket. It ties as the second longest homestand to start a season in program history.

For the third straight season, NCAA women’s basketball games will be played in four 10-minute quarters. Teams reach the bonus and shoot two free throws on the fifth team foul in each quarter. In the four-quarter format, team fouls reset to zero at the start of each quarter. Teams have four timeouts (three 30s, one 60), three which carry over to the second half. They will be able to advance the ball to the frontcourt after a timeout with less than 59.9 seconds in 4Q. There are seven media timeouts (four under five minutes in quarter/first called), two intermission media timeouts (after first and third quarters) and the first team-called timeout during the second half. Bands or amplified music may play during any dead ball.

Fans are encouraged to connect with the Miners on Facebook (UTEP Women’s Basketball), Instagram (@utepwbb) and Twitter (@UTEPWBB). They are also encouraged to use #WeAreMiners in posts.

UTEP is 6-3 all-time against Texas Southern, although the Lady Tigers emerged victorious in El Paso 89-68 last year on Nov. 13, 2016. The Orange and Blue had won six straight in the series prior to falling at home last year. The squads first met in the 1978-79 season, which resulted in a 79-69 Texas Southern victory.

GETTING TO KNOW TEXAS SOUTHERN

Texas Southern has averaged more than 20 wins the past five years, but it is off to a 1-3 start in 2017-18. The Lady Tigers, who were 23-10 a year ago, returned three starters and seven letter winners from that squad. They are led by the explosive Joyce Kennerson (24.0 ppg), but Kaitlyn Palmer (13.5 ppg), Niya Mitchell (8.0) Artavia Ford (6.8 ppg) have also proven to be effective scorers. Mitchell is the top rebounder for the squad at 7.0 rpg but overall TSU has a -4.2 rebounding margin (31.3-40.3). Turnovers have been an issue with the Lady Tigers committing 19.8 per game. TSU has been held to 34.4 percent (72-209) from the floor while allowing the opposition to drain 43.1 percent (103-239) of its shots from the field. It is 93rd nationally in blocked shots per game (4.3) but is in the bottom 300 in the NCAA for eight major stat categories. Texas Southern is a historically black university located in Houston, Texas, which was founded in 1947. Notable alumni include Yolanda Adams (American Grammy and Dove-award winning Gospel music singer and radio show host) and Michael Strahan (former NFL defensive end for the New York Giants and one of the hosts for Good Morning America)

Senior Sparkle Taylor posted her third career double-double (14 points, 13 rebounds) but visiting Texas Southern rode the hot shooting of Kaitlyn Palmer (24 points) to knock off UTEP, 89-68, inside the Don Haskins Center on Nov. 13, 2016. Palmer connected on 8-16 from three-point range to lead a quartet of players in double figures for the Lady Tigers, who managed to counter every run by the Miners to emerge victorious. TSU, which has averaged 20 victories over the past four years, connected on 45.8 (33-72) of its shots while the youth-laden UTEP squad finished at 36.1 percent (27-72) from the floor. The Miners, who have more newcomers (eight) than returnees (five) on the roster for the first time since the 2008-09 campaign, did well to win the boards (49-48) while also forcing 15 turnovers but it wasn’t enough to compensate in other areas. Junior college transfer Axelle Bernard stuffed the stat sheet with 11 points, seven rebounds and five blocks in a team-high 34 minutes of action. Freshman Zuzanna Puc nearly recorded a double-double (nine points, 10 rebounds). Freshman Jakeira Ford (nine points, three rebounds), Junior Lulu McKinney (seven points, four assists), junior-college transfer Chanel Khammarath (five points, two steals), freshman Katarina Zec (five points, two rebounds) and sophomore Najala Howell (five points) buoyed the efforts of Taylor.