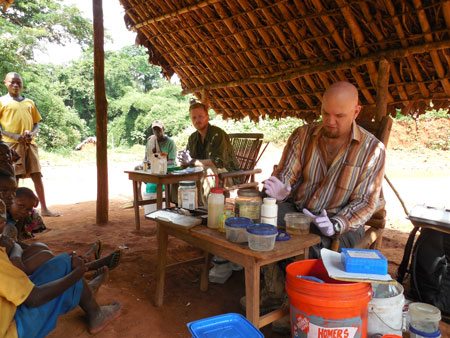 In the middle of the jungle, UTEP researchers are pioneering new science.

“Ninety-nine percent of the time we had no electricity, no water, temperatures up to 100 degrees or more, and just terrible, terrible roads,” Eli Greenbaum, Ph.D., associate professor of biological sciences, recalled about a trip to the Democratic Republic of the Congo to collect chameleon specimens. “At one point, our truck flipped over on its side and we had to get a bunch of villagers with lianas (large climbing vines found in rainforests) to pull it upright. We got stuck in the mud for hours and hours at a time almost daily during that trip.”

“Psychologically, we were just beat down, but we continued to do the work,” said Daniel Hughes, a Ph.D. candidate in UTEP’s Ecology and Evolutionary Biology program who traveled to the Democratic Republic of the Congo and Uganda with Greenbaum. The benefits of such endurance have had a ripple effect far beyond those muddy roads.

By figuring out how to preserve animal brains in the remote locations in which they are found – locations almost completely opposite those of a controlled laboratory or 21st century urban area – these UTEP researchers have given scientists a way to study the brains of a wide range of creatures, including those found in biodiversity hotspots especially vulnerable to the threat of climate change.

Preservation of a reptile specimen in alcohol is done all the time, but that process dehydrates the animal’s brain and is not optimal for detailed anatomical studies of the brain. A better way to preserve that organ uses formaldehyde, but is usually performed with specialized laboratory equipment, including electronic pumps that infuse the preservative into the specimen’s circulatory system, a fume hood to remove toxic vapors, and refrigerators and freezers for chemical and sample storage.

None of that is available when you’re on a remote mountain looking at a rare species and have no idea whether you’ll ever see it again.

“What we did in this study is create a small field kit with syringes and some simple reagents you can mix up in a bottle to make a pretty decent preservative,” said Arshad Khan, Ph.D., assistant professor of biological sciences at UTEP and senior author of the study.

“The technique is easy enough that someone like myself who has zero expertise previously in neuroanatomical techniques can learn it very quickly and … without a whole lot of money,” said Hughes, who was the lead author on the paper announcing the UTEP team’s new method.

He and the team hope that people living in or near remote areas flush with biodiversity can take this preservation technique, use it, and then send the specimens to laboratories equipped with the technologies to do sophisticated analyses, which can then be digitized and placed online or sent out for the widest access.

“The results of this project sit at an important intersection between field biology and neurological research,” said Paul Gignac, Ph.D., assistant professor of anatomy at Oklahoma State University and a co-author of the paper. Because it is now possible to preserve brain tissue in remote biodiversity hotspots, there are exciting possibilities for the future.

“Studying the basic biology of the animal when it’s on the path toward extinction is important and fundamental,” Hughes said. “If we can maybe elucidate something about the brain or behavior … we might be able to inform adaptive conservation efforts to actually help that animal within its habitat.”

Thus, a tiny chameleon became the bridge that brought researchers from biological sciences and ecology and evolutionary biology together. In the beginning, Khan asked, “If you are already collecting these animals, why don’t we try to look at their brains?” His goal was to expand the area of comparative neurobiology, the study of brains across different species to understand how they evolved over time.

“If you’re trying to understand evolutionary relationships, it is important to identify features of brain anatomy that are ancestral and in common, and then see how we diverged from reptiles way back when to see how the differences in specialization emerged,” Khan added.

Examining the specimens can potentially lead to biomedical discoveries. For example, scientists studying important neurotransmitters like dopamine benefit from the mapping of it in diverse animal brains. A variety of mental disorders and neurodegenerative disorders like Parkinson’s disease involve deficiencies in dopamine, so continued investigation into how brains from a wide variety of species use this chemical may unlock much-needed remedies.

The team from the UTEP Systems Neuroscience Lab, which Khan directs, spent hundreds of hours using a microscope to carefully analyze the quality of the brain tissue Hughes harvested from the African jungles. The lab team determined that their bare-bones preservation technique was comparable to preservation methods used in a laboratory environment equipped with modern technology.

In addition to Hughes, Greenbaum and Gignac, the UTEP team involved with the project included Professor of Biological Sciences Carl

Lieb, Ph.D., whose expertise in reptile biology contributed to the procedures that needed to be developed in the lab before they could be translated into the field for Hughes to use on the chameleons they collected.

Ph.D. candidate Ellen Walker was the paper’s second author, serving as the liaison between the reptile trio and the UTEP Systems Neuroscience Laboratory.

“I give the bulk of the credit for all the nuts and bolts of the experimental work to Danny [Hughes] and Ellen [Walker],” Khan said. “They really are the ones that drove this. These are the next generation of scientists. We’re hoping these lessons can be passed on to their students as well. We’re quite proud of the fact that there are such good students coming out of UTEP.”

Some may say it is antithetical to the preservation of endangered species to capture and sacrifice them. While some of the chameleons in the UTEP study are considered threatened species by the Convention for the International Trade of Endangered Species (CITES), the reason for that classification is due to the hundreds or even thousands of animals overharvested for the pet trade, explained Greenbaum, who is the director of the UTEP Biodiversity Collections.

“If we don’t go in and sample the animals to see what’s going on, they will go extinct for sure,” Greenbaum said. “To put this into perspective, we’re collecting at most a dozen specimens so that we can understand information about their biology, and that is not going to affect the viability of the species for the long term,” he said.

The scientists are very careful to get as much value as possible out of the specimens they collect, Lieb said.

“When you do studies like this that are multiple use and interdisciplinary, someday someone may go in there and pull out their livers to look at metal contamination from nearby mining, or something we have no idea about and would never have had an idea about but for the fact that these specimens will exist in perpetuity,” he said. “They will last for centuries.”

There are also future needs we can’t even imagine which these specimens may address.

“If these places that we’re collecting in right now are destroyed, either from human agency or something else, it might be possible to clone these things based on what we have in the Biodiversity Collections – put them back and fix it. But we can’t put something back into nature unless we know it was there in the first place,” Greenbaum said.

In case it hasn’t already come across, the stakes are high.

“I was so nervous with my first perfusion in the field,” Hughes said, referring to the process of preserving an animal with formaldehyde using its own circulatory system. “You don’t want to be the guy who dropped the ball. For the animal’s sake and science’s sake, you want to come back with data. … It’s a huge responsibility.”

The team’s study was published in the journal PLOS ONE, a free, open access journal that will allow researchers in underdeveloped countries who can’t afford a subscription fee for academic publications to benefit from the work, particularly those located in biodiversity hotspots around the world.

The UTEP team also insisted on including additional information not necessarily connected to their experiment – elevation of the animal’s habitat, for example. That way, scientists far into the future can go back to these regions with exact coordinates and a description of the location to continue checking on the species.

UTEP’s Border Biomedical Research Center also provided valuable assistance with their statistical consulting laboratory, which analyzed the team’s data. That information has also been released with the published paper for researchers anywhere to reinterpret or reanalyze according to their needs.

Everyone involved in the project is motivated to continue blazing new trails. Leading such a project has inspired Hughes to keep doing research.

“Learning these techniques and thinking about how they can be applied into whatever endeavors I get into in the future are very important,” he said. “Scientists sometimes get very narrow, very specific, and they don’t have the perspective of going outside of their discipline to really tackle a problem within their discipline.”

For Walker, the collaboration of helping someone outside of her own discipline understand what she did and vice versa was the main excitement.

“The main thrust of the neuroscience research that we do in the lab can be applied to many different disciplines, and that was something that was really cool to see in this project,” she said. “Field biologists can inform us about how diverse species can be, and we as bench scientists can help inform field biologists to really delve further into their model system and understand the intricacies of that model system.”

Hughes pointed out that the whole endeavor began with a “What if?” conversation between Greenbaum and Khan. After three years, endless hours of manpower and dedication, and of course dodging the perils of the jungle to try something never tried before, the results are promising beyond expectation.