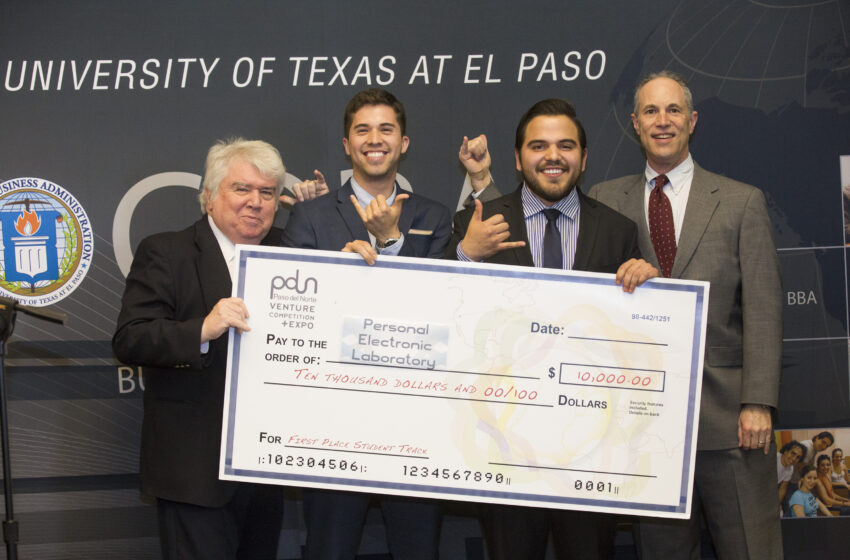 A pair of seniors from The University of Texas at El Paso won the fifth annual Paso del Norte Venture Competition with a concept where electronic circuits can be automatically reconfigured with design software.

The Personal Electronic Laboratory (PEL) team of Andres Mejorado, a marketing major, and Dante Chaparro, an engineering leadership major, earned a $10,000 check for their idea where the new technology will create mobile tablet-sized modules that will provide users with an affordable and comprehensive electronics laboratory.

The team created this project to revolutionize the way electrical engineering is taught. The idea will shorten the amount of time students spend soldering components to a board compared to the time they actually spend on circuit design.

“This feels great,” Mejorado said after the big win. “It was exciting. It was a lot of work and it felt good to see it all pay off.”

He and Chaparro started working on the project in January 2017 and spent about three to five days per week making it as good as possible. The team also won $500 for winning the competition’s Best Business Plan. Mejorado thanked Andrik Lafuente, a senior electrical engineering major, and David Zubia, Ph.D., professor of electrical engineering, for their help and support.

The marketing student said that he and Chaparro would use their money to conduct additional market research and see how they could refine their product based on the feedback they got from seasoned investors, venture capitalists and regional business leaders who judged the competition.

The PEL competed against 11 other teams from UTEP, New Mexico State University, Universidad Politécnica de Chihuahua, and Tec de Monterrey Guadalajara. This was the first year the two-day contest included a team from outside the region.

The level of competition among the teams continues to increase, said Aaron R. Cervantes, director of operations with UTEP’s Mike Loya Center for Innovation and Commerce, which hosts the event.

“It is surprising how each university that participates raises the bar every year,” said Cervantes, who is researching other competitions that PEL may want to enter. “We are grateful for everyone involved, especially the judges, mentors and institutions that support us.”

Cervantes said the benefits of this competition go beyond the monetary prizes. He said participants get valuable feedback from judges who offer advice and suggestions.

The Mike Loya Center sponsors, conducts and promotes research in innovation, commerce and entrepreneurship education. Its goal is to grow the region’s economy.

The center was founded in 2012 through generous contributions from UTEP alumnus Mike Loya to connect the colleges of Engineering and Business Administration, and the University with the City of El Paso to support innovation and commerce with partners to include The Mine, UTEP’s student incubator, and The Hub of Human Innovation.