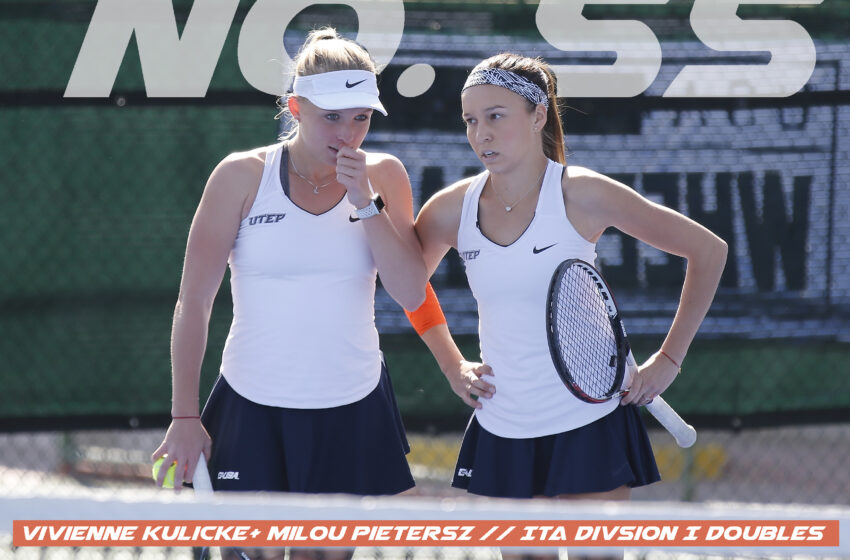 Since the last rankings, Kulicke and Pietersz tallied a 6-1 win over Houston’s Tsveta Dimitrova and Cristina Rovira as well as a 6-2 victory over Nebraska Kearney’s Ana Royo and Camryn Parnell. Matches against Wyoming and Colorado were unfinished as the Miners had already clinched the doubles point.

The Miner duo has also registered wins over Abilene Christian, UT-Arlington, Tulane, Arizona, Sacramento State and, most notably, a 6-1 upset of TCU’s then-No. 16 ranked Donika Bashota and Olaya Garrido-Rivas. Bashota and Garrido-Rivas are now ranked No. 13 in doubles.

Kulicke and Pietersz, who also play the No. 1 and 2 spots in singles respectively, won the USTA/ITA Mountain Regional Championship in October, marking the first time in program history that a doubles team claimed a championship at the event. The pair advanced to the 2016 USTA/ITA National Indoor Intercollegiate Championships in Flushing, N.Y. but ultimately fell in the consolation final to Michigan.

The Miners will return to action Friday (March 3) when they head to Flagstaff, Arizona to take on Northern Arizona in the first of three dual matches this weekend. First serve is at 2 p.m. MT.