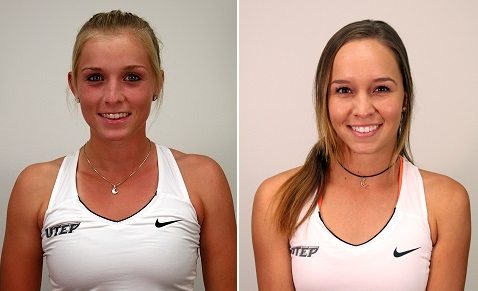 In compiling a 6-1 spring record, UTEP women’s tennis doubles tandem Vivienne Kulicke and Milou Pietersz has earned a no. 48 national ranking by the Intercollegiate Tennis Association. The ranking is the highest of any Conference USA doubles team, with Rice’s Lindsey Hodge and Wendy Zhang checking in at No. 50.
The Miner duo has registered wins over Abilene Christian, UT-Arlington, Tulane, Arizona, Sacramento State and, most notably, a 6-1 upset of TCU’s then-No. 16 ranked Donika Bashota and Olaya Garrido-Rivas. Bashota and Garrido-Rivas are now ranked No. 13 in doubles. Oklahoma’s 10th-ranked Lily Miyazaki and Julie Byrne gave the duo its only loss, 6-3. The pair is 16-5 overall.
Kulicke and Pietersz, who also play the No. 1 and 2 spots in singles respectively, won the USTA/ITA Mountain Regional Championship in October, marking the first time in program history that a doubles team claimed a championship at the event. The pair advanced to the 2016 USTA/ITA National Indoor Intercollegiate Championships in Flushing, N.Y. but ultimately fell in the consolation final to Michigan.
The Miners will play their first home match on Saturday (Feb. 11) against Houston. First serve at the El Paso Tennis Club is 11 a.m.
Tags: Milou Pietersz utep UTEP Tennis Vivienne Kulicke