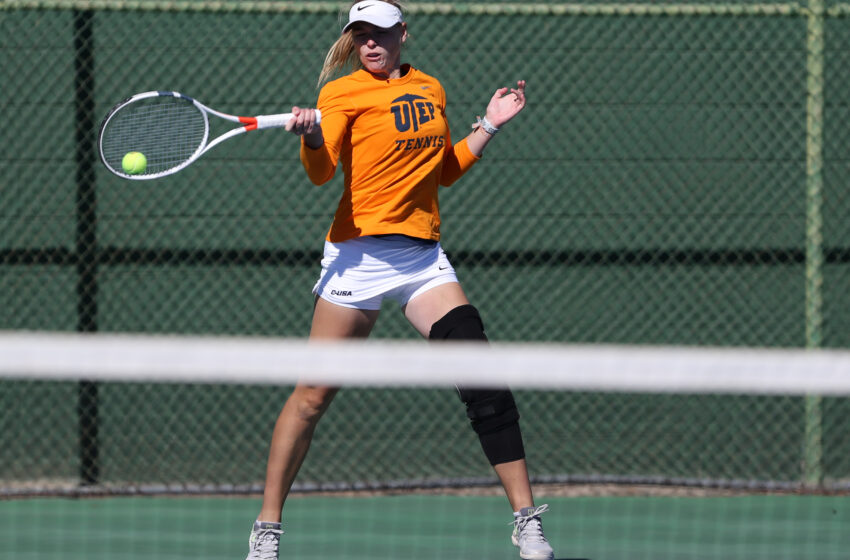 The effort improves the Miners (2-5) to 2-0 on the season at home, and it also serves as their first Conference USA victory in three years. The result against the Roadrunners (5-6) was the first win of at least 5-2 against a league opponent since a 6-1 vanquishing against Southern Miss on Feb. 23, 2014.

“It was a great start in doubles where we played with a lot of intensity and confidence,” head coach Ivan Fernandez said. “We also played solid in singles. Kirsten (Prelle) and Erandi (Martinez) got us going with singles wins. It was great that our senior Yvette (Van Oijen) was able to clinch the match. Then to cap it off, Kathleen (Percegona) was able to get her win after being so close in the last match. I’m very proud of the girls. We hope we can keep this confidence going the rest of the way.”

UTEP got the start it needed in doubles, claiming the point as result of victories at both the No. 2 and No. 3 positions. Rine Nozaki and Martinez (UTEP) battled past Mariah Plauth and Catalina Cabrique, 7-5, at No. 3 doubles.

The tandem of Vanessa Valdez and Van Oijen took down Charleen Tiwari and Sophie Omoworare, 6-4, at No 2 to lock up the team point for the Miners. Miner freshmen Prelle and Percegona were leading in a tiebreaker in their match when it was halted due to clinch format being used for doubles.

After a short break, focus switched over to singles play. The Roadrunners struck back by having Lauren Cabrera topple Valdez, 6-3, 6-1, at No. 2 singles. Nozaki was clipped by Kylee Kato, 7-6, 6-1, at No. 4 singles but the rest of the day belonged to the Orange and Blue.

Martinez got the Miners on the board for singles action with a 6-4, 6-4, besting of Mariah Plauth at No. 3 singles. Prelle, urged on by the support of her mom in the stands, followed shortly thereafter. She defeated Jasmin Starr, 7-6, 6-4, at No. 1 singles. It marked the third consecutive victory for Prelle.

Fittingly enough lone senior Van Oijen clinched the team outcome by toppling Sophie Omoworare, 7-6, 6-4, at No. 6 singles. For the icing on the cake, Percegona rallied past Cabrique, 7-6, 7-5, at No. 5 singles.

The Miners will challenge No. 11 in Division II University of Central Oklahoma (2-0) at 12 p.m. Saturday and face regional opponent Utah State (3-5) at 10 a.m. Sunday to wrap up the three-match homestand.

Admission is free for each of the matches.