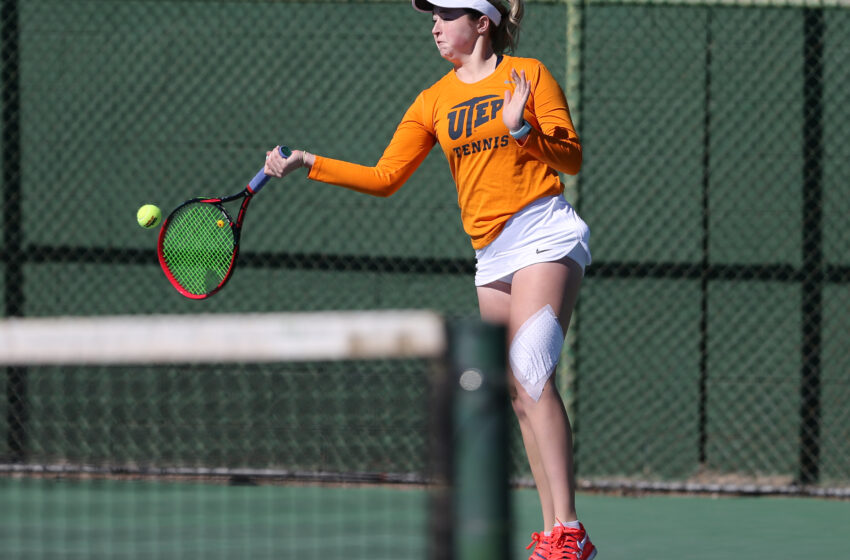 FORT COLLINS, Co. – The UTEP tennis team secured the doubles point while also getting a win in singles from freshman Kirsten Prelle, but it wasn’t enough in a 5-2 setback at Colorado State Sunday.

“It was a very disappointing loss today,” UTEP head coach Ivan Fernandez said. “We started strong by winning doubles, but could not win any other singles (matches) other than Kirsten (Prelle) at No. 1. We had chances on other courts, but could not put it together. The team needs to find a way to believe in themselves when things aren’t going our way. We will continue to work hard.”

The match was played indoors due to weather, but the Miners had no problems early on in adjusting. The freshmen tandem of Prelle and Percegona cruised past Emily Luetschwager and Nancy Ghanem, 6-2, at No. 2 doubles. Vanessa Valdez and Yvette Van Oijen bested Stella Cliffe and Emily Kolbow, 7-5, at No. 1 doubles, resulting in the Orange and Blue taking the doubles point. Even though Rine Nozaki and Erandi Martinez were tripped up by Riley Reeves and Alyssa Grijalva, 6-2, at No. 3 doubles, UTEP carried the 1-0 lead into singles action.

Aside from Prelle, the Orange and Blue weren’t able to sustain the momentum as the Rams rallied for the win. Prelle looked to be in trouble early by dropping the first set at No. 1 singles to Luetschwager, 6-3. She refocused on won the next two sets, 7-5, 6-4, to complete the comeback for her sixth triumph in the past seven matches at the top spot.

Valdez started strong by winning the first set at No. 2 singles against Cliffe, 6-3. Her foe struck back, however, taking the final two sets, 6-1, 6-2. It was a similar story for Nozaki at No. 6 singles against Emma Corwin. The freshman won the first set, 6-3. She dropped the second set, 6-3, and then fell in the super tiebreaker, 10-4.

Martinez locked up with Grijalva at No. 4 singles. She lost the opening set, 6-2, but recovered nicely to take the second set, 6-4. It was back-and-forth in the final set, with the sophomore ultimately being edged, 7-6. Percegona was bounced at No. 3 singles by Ghanem, 6-2, 6-3. Van Oijen, who tasted victory against Wyoming on Saturday (March 2), couldn’t duplicate that success in a 6-0, 6-0 setback to Priscilla Palermo at No. 5 singles.

UTEP will look to apply the lessons learned from the pair of road matches this weekend when it returns to the courts to play at New Mexico at 2:30 p.m. MT on March 10.