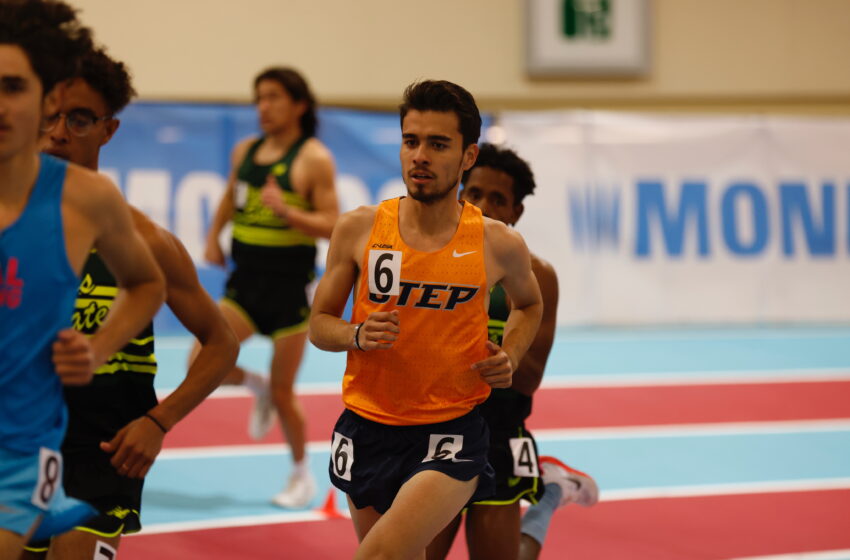 The UTEP track and field team turned in another productive performance at its second meet of the season.

The Miners combined for eight top three finishes, while other Miners improved on their marks or times at the New Mexico Team Open on Saturday afternoon in the Albuquerque Convention Center.

“I’m quite pleased with today’s effort from both teams. We came here to get some work done today having most of our athletes compete in multiple events, since we are only one tune-up competition away from the conference championship meet,” UTEP Head Coach Mika Laaksonen said. “It was the distance group’s turn to shine today, while the more technical event performances were more of a mixed bag. Clearly coaches have utilized this past week correcting technical deficiencies and some of student-athletes weren’t able to benefit from those tweaks yet today. We have multiple student-athletes on both teams that have not yet competed this season due to injuries and virus challenges. The number one priority before the next one is for us to find a way to get full roster of athletes to that event. Our teams took big strides forward today, so it’s easy to move forward from this one.”

Sah-Jay Stevens is also off to a solid start in 2022, setting her personal best for the second week in a row. The senior from Jamaica turned in an 18.03-meter (59-2) mark in the weight throw, which was good for second place. Stevens captured her second consecutive second-place finish after registering a 17.78-meter mark last weekend.

Jalen Cadet notched a second-place finish in the men’s long jump. The freshman from the Bahamas leaped to a personal-best 7.12-meter (23-4.50) mark. Last weekend, Cadet recorded a 6.43-meter mark. Fellow freshman Jakub Belik also competed in the event, the first of his collegiate career, and posted a 6.90-meter (22-7.75) leap. Belik also competed in the high jump, finishing fourth.

Maribel Caicedo set a personal best with an 8.22 in the women’s 60-meter hurdles, placing second. The Ecuador product ranks no. 1 in C-USA with her time.

Carolyne Chepkosgei competed in her first collegiate 600m run, finishing in third place with a time of 1:32.93. Chepkosgei also garnered a fourth-place finish in the 800m run (2:10.29).

Loubna Benhadja competed in her first collegiate indoor 400-meter dash. The freshman from Algeria finished fourth, clocking in a 55.69. Her time would rank in the top four in the Conference USA.

Misael Ortiz set a personal best with a 17.28-meter (56-8.5) toss in the weight throw, a significant increase from his previous mark of 15.54m. The El Paso product from Socorro High School would rank top five in C-USA with his current mark.

The women’s distance medley finished in third, as Ruth Jerubet, Benhadja, Karoline Daland, and Victoria Ovalles clocked in a 12:44.46.

Freshman Victor Kibiego clocked in a 4:09.10 in the men’s mile run. His mark would rank in the top five in C-USA.

UTEP will send a few student-athletes to compete at the NM Collegiate Classic on Saturday, Feb. 4-5. Following that, the Miners will take the indoor track again in the ABQ at the Don Kirby Elite Invitational (Feb. 11-12). The Conference USA Indoor Championships will be held on Feb. 19-20 in Birmingham, Ala., and the indoor season will conclude at the NCAA National Championships March 11-12, also in Birmingham.