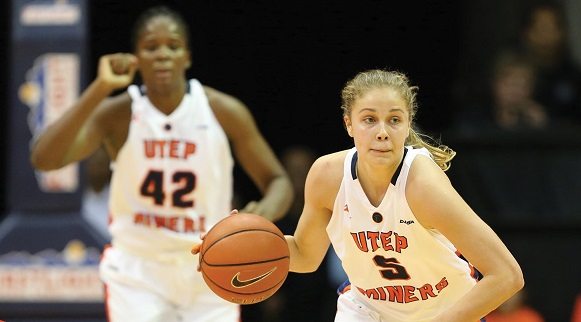 All five starters reached double figures in scoring and UTEP used a huge second quarter to power past Marshall, 84-74, at the Don Haskins Center Saturday afternoon.

UTEP shot 40.8 percent (29-71) from the floor, won the boards (46-45) and converted 19 Marshall turnovers into 28 points to secure a big bounce-back win. The Miners racked up 23 assists on the 29 made field goals while also committing only 13 turnovers.

Shayna Gore tallied a game-high 26 points to pace the Herd, but no other Herd player had more than 11 points.

“I’m really proud of our team and we needed this win,” UTEP head coach Keitha Adams said. “To have five players in double figures, that was huge. We had a great second quarter; it’s probably the best 10 minutes of basketball we’ve played this year. I thought it was a gut check game. Our young team is starting to understand our system and gaining a lot of experience.”

The 30-point burst was the Miners’ second-highest scoring total in a quarter (32 vs. WNMU) this year and ranks four on the program’s single-game records.

It was back-and-forth play for most of the opening frame, with three ties and three lead changes, before Marshall used consecutive three pointers (McKenzie Akers, 1:35 & Gore, 00:39) to surge ahead by five (17-12). The difference remained five (19-14, 9:28 2Q) before a Taylor jumper and an old-fashioned three-point by Ford (assist to Cook) knotted the contest at 19.

Marshall nailed another triple to regain the lead but UTEP ripped off eight straight points to vault back ahead. The Miners were just getting warmed up, though, with a 9-0 run late in the quarter essentially delivering the knockout punch.

The visitors had aspirations of mounting a comeback, but UTEP kept its composure even as the Herd made some charges. Marshall managed to trim the deficit to eight on a pair of occasions but it could get no closer.

The Miners will now face the daunting task of playing four straight league road games for the first time since 2005-06 (initial year in C-USA). Upon conclusion of the trip, UTEP will have had seven of nine away from home. The sequence starts at UAB at 6 p.m. MST/7 p.m. CSTThursday, with Duke Keith on the call for 600 ESPN El Paso.