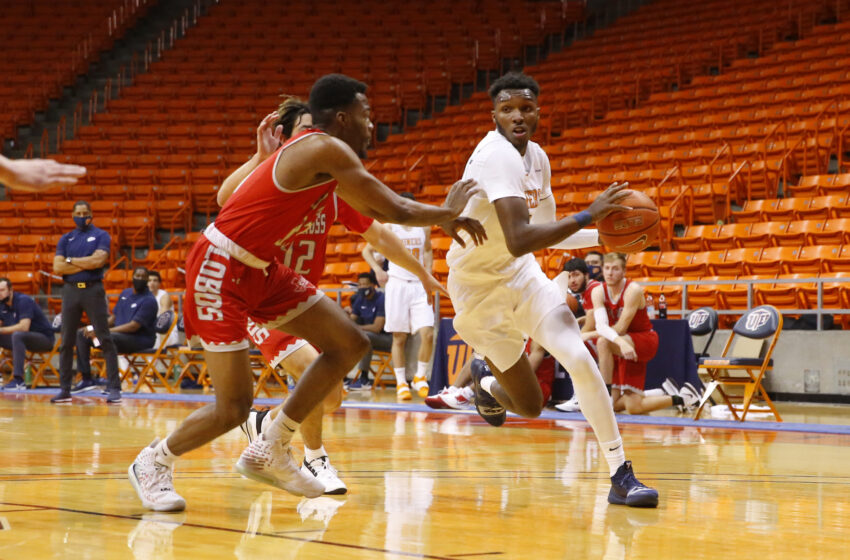 The UTEP men’s basketball team will play its first road game of the season when it takes on Saint Mary’s College on Tuesday night in Moraga, California.

“[Saint Mary’s College] is an experienced team and they have experience from a year ago with a number of different players coming back,” third-year UTEP Head Coach Rodney Terry said. “They lost their go-to guy Jordan Ford who was a 19-point a game scorer. But the guys who are returners play significant minutes. [Saint Mary’s College Head Coach] Randy [Bennett] has built a great program over there – one of the best programs on the West Coast.”

The Miners (2-0) are coming off an 84-65 victory over Sul Ross State on Dec. 5 in the Haskins Center. Souley Boum recorded a double-double on career highs in points (34) and assists (11).

Boum also added a career-best four steals, five rebounds and a blocked shot. Boum was also the first Miner since the 2016-17 season to record a double-double on points and assists and first to dish out double-digit dimes since that season. Dominic Artis scored 20 points and tallied 10 assists on Feb. 11, 2017.

It’s early in the year, but Boum leads Conference USA in scoring at 28.5 points per game, and ranks second in assists (7.5 apg). Boum ranks second nationally in scoring behind Iowa’s Luka Garza (34.0 ppg). Boum was also the only Miner to get to the foul line on Saturday night, and made a perfect 13-of-13.

UTEP registered 23 assists, making it back-to-back games with 20-plus helpers. The Miners last recorded 20 or more assists in back-to-back contests during the 2015-16 season.

Saint Mary’s College is 4-1 on the season after defeating Texas Southern, 82-70, on Dec. 3 at UCU Pavilion. The Gaels dropped their first contest of the season, falling to Memphis at the Bad Boy Mowers Crossover Classic in Sioux Falls, S.D., on Nov. 25. SMC, however, has won its last four games, defeating Northern Iowa and South Dakota State at the Classic, and defeating Nicholls State, 73-50, on Dec. 1, in Moraga, Calif.

The Gaels are averaging 69.8 points per game on 44.1 percent shooting from the floor and 36.6 percent threes. Alex Ducas leads the team in scoring at 13.0 points per game. The 6-foot-6 sophomore guard/forward also paces SMC in rebounds (7.2 rpg). Ducas’s season high was a 25-point effort against South Dakota State.

Tommy Kuhse averages 11.6 points per game and leads the squad with 39 assists. Kuhse has tallied 23 of those assists during the last two games (10 vs. Nicholls State and 13 vs. Texas Southern). Matthias Tass, a 6-10 junior center, is putting up 10.2 points per contest and leads the Gaels with six blocked shots.

“They’re a team that is a rhythm offense team,” Terry added. “They really run their offense very efficiently and shoot the ball extremely well. Kuhse is going to be very difficult to deal with because he’s the head of the monster and he’s the guy who orchestrates everything in terms of playing downhill from ball-screen action. We’ll have our hands full and it will be a great challenge for us.”

The Miners and Gaels can be heard on 600 ESPN El Paso with “The Voice of the Miners” Jon Teicher calling in the action in his 40th season.  Tipoff is set for 8 p.m. MT/7 CT in the UCU Pavilion.

The contest will also be streamed free on the WCC Network.