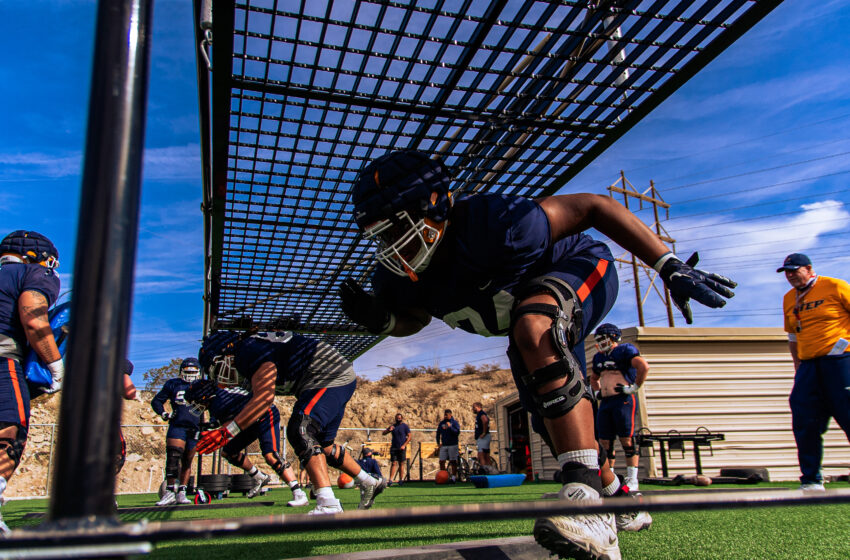 Often the most unheralded position on the field, offensive linemen have a tremendous impact on the game. Fortunately for the Miner faithful, the UTEP football team returns all five starters on the o-line from a year ago.

In fact, UTEP has “a great group” according to head coach Dana Dimel.

“We’ve been playing together for the past three years, most of us,” Klein said. “We have the most experience on the team, the most veteran group. The play isn’t going anywhere unless we make something happen. It kind of feels like it’s all on our back this year.”

Dimel runs a complex offensive system, which puts emphasis on an experienced and quality group at the offensive line.

“It’s really important (to have an experienced group) because we try to do so many different things and try to scheme our run game in many different ways,” Dimel said. “So it’s really important to have this kind of experience with our offensive line. We have nine guys who have had playing time and done some good things there. They’ve worked together for multiple years now. It just really helps the continuity of our offense.”

It’s a hard-working, humble, but confident group heading into 2021.

“We have it all set up,” DeHaro said. “We have the toughness, we have the experience. We’re ready to go.”

With a convoy of running backs, UTEP will be looking to punish opponents on the ground with physical play. Deion Hankins is one of those backs, and his running style doesn’t go unnoticed by the big guys up front.

“It’s so nice. When you see Deion ‘Tankins’ truck through a guy on the one-yard line, there’s nothing like it,” Klein said. “Knowing that those guys have our back if we miss a block, it feels great.”

UTEP averaged 23 points per game in 2020, its highest scoring output since 2016 (26.3). That figure can be directly tied to the play by the offensive line according to Dimel.

“We lean on them. That’s kind of the heart and soul of what we have,” Dimel said. “If we’re good up front we’re going to be able to do a lot of different things offensively. It’s nice to have those guys coming back. They’ve all done a nice job of getting themselves bigger, stronger and in better shape. That’s important for those guys as well.”

Dimel’s offensive system is elaborate, but appreciated by the o-line.

“It’s great. It’s not just a run-down offense, it’s everything. You know we’ve got outside zone, inside zone, pin and pull. All these different types of pass schemes. It’s great to be an o-lineman on this team.”

The season opener at I-10 rival NM State (Aug. 28) is just around the corner, but DeHaro and company will be ready.

“We’re on the right track, we’re having a good camp right now,” DeHaro said. “We’re all excited for this year.”

The 2021 UTEP Football season opens on Saturday, Aug. 28 with the “Battle of I-10” versus NM State in Las Cruces. Kickoff is set for 7:30 p.m. MT at Aggie Memorial Stadium. The home opener versus Bethune-Cookman is scheduled for Saturday, Sept. 4 at the Sun Bowl and will kick off at 7 p.m. MT.