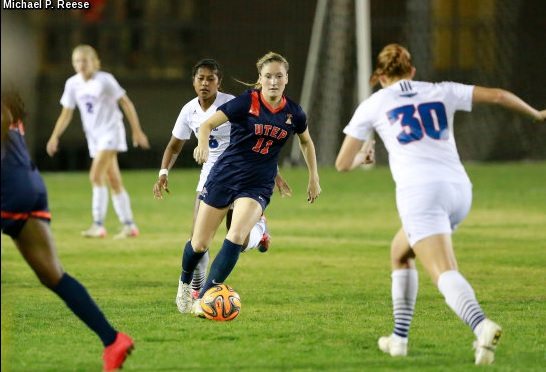 UTEP senior Angela Cutaia hammered home a header at 80:51 to help lift the home side to a 1-0 victory against Abilene Christian at a sun-soaked University Field Sunday afternoon. Freshman Carleigh Simmons was credited with an assist on the play for her service off the corner kick.

The Miners (1-1-0) controlled things throughout most of the contest, holding advantages in both shots (18-10) and shots on goal (8-3). The visiting Wildcats (0-2-0) relied on the strong play of goalkeeper Kelsey Dombrowski, who turned away seven shots, while also taking advantage of two headers from Cutaia which struck the post.

Miner netminder Alyssa Palacios made three saves, all in the first half, on the way to recording her first career shutout. She had plenty of help on the day, with UTEP’s back line working well as a unit to limit the scoring chances for the Wildcats.

“At the end of the first half things started going well of us,” UTEP head coach Kevin Cross said. “We continued through the second half and played a real good second half.”

UTEP nearly got on the board in the ninth minute. Using one of her patented long throw-ins, Aleah Davis found a cutting Cutaia at the near post. Cutaia, who was well positioned, headed a shot which clanked off the post. Three minutes later the Wildcats the ones one the offensive as Chantal Kinsey unleashed a low, hard shot. Palacios tracked it well, and delivered her second save of the match.

In the 18th minute Davis made a good effort to find some space in the box. The free kick service found her head, but Dombrowski turned away the try. The Miners continued to pressure as the half wore on, particularly in the final 10 minutes of the stanza. Cutaia used a quick spin move but the ACU defense blocked the shot. The rebound went to fellow classmate Taylor Kidd, whose shot forced Dombrowksi to make a diving save.

In the 41st minute Alexa Bain jumped into an offensive rush. The junior sliced a shot through the wind which required a leaping save from Dombrowski.

The Miners carried the momentum into the second half, generating two shots in the first four minutes. The try by juniorBri Barreiro whistled wide at 47:15 while a heavy shot from Kidd carried wide left less than a minute later. In the 51st minute it was Cutaia knocking on the door again with a header. Dombrowski used a diving stop to slow down the shot, which still hit the post before being cleared.

Sophomore Margaret Hadley showed off her wheels two minutes later. She timed her run perfectly to get in behind the defense for a breakaway only to have Dombrowksi rob her.

The Orange and Blue’s persistent pressure paid dividends with about nine minutes to play. The sequence started on a corner, UTEP’s sixth of the contest. Freshman Carleigh Simmons played the ball into the box. It was deflected and hung in the air where Cutaia used perfect form to hammer home the header. The ball kissed the crossbar and ended up in the back of the net.

ACU regrouped well and earned two corner kicks down the stretch. Both times, though, Davis used her athleticism to win the service and ushered the ball out of the Orange and Blue’s defensive zone.

UTEP will return to action next weekend with a pair of road matches. The Miners will play at Houston Baptist at 4 p.m. MT Friday while traveling to Texas State for a 12 p.m. MT contest on Aug. 30.