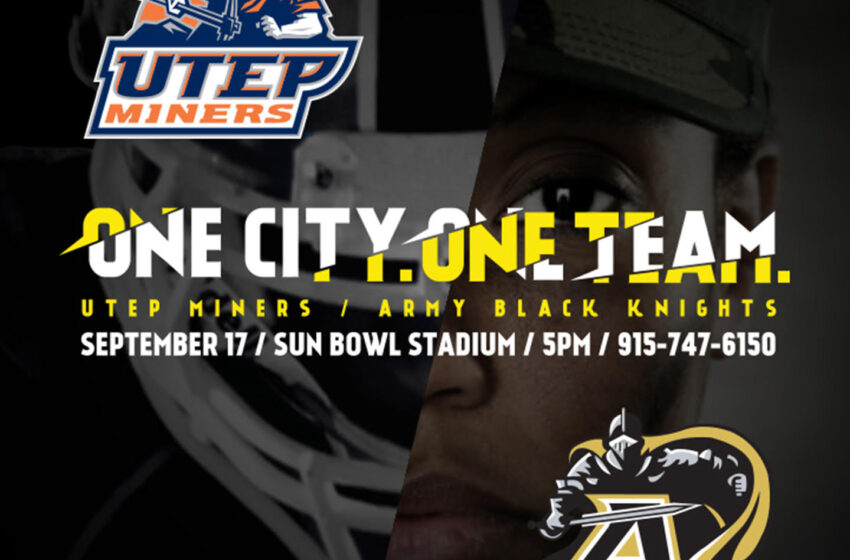 “One City.  One Team.”  That’s the message UTEP Athletics wants to convey for the Miners’ historic football matchup with the Army Black Knights on Sept. 17 in the Sun Bowl.

On Friday UTEP released the first wave of graphic content promoting the contest.  The unveiling of the messaging is just the start of a summer-long blitz celebrating the inaugural matchup between the teams.

“It was essential to present a unified front with Fort Bliss serving as such a vital part of our community,” UTEP Director of Athletics Bob Stull said. “This is so much more than a football game.  It is a celebration of our nation’s military and their presence in the Sun City.”

UTEP Senior Associate Athletic Director Chris Park said the UTEP-Army game will be designed to take on an “event” feel, similar to the UTEP-WKU basketball game in February where the 1966 national championship team was honored on its 50th anniversary.

“We are in the planning stages right now and can’t wait to announce all of the great elements surrounding the game in the coming months,” he said.  “We have formed an outstanding committee with representatives from the city and county of El Paso, UTEP and Fort Bliss.  These individuals are all dedicated to putting on a show that El Pasoans will never forget.”

UTEP football season tickets are on sale now by calling (915) 747-6150.  The Miners will play seven home games in 2016, including the aforementioned matchup with Army, four C-USA contests and the season opener versus I-10 rival NM State.