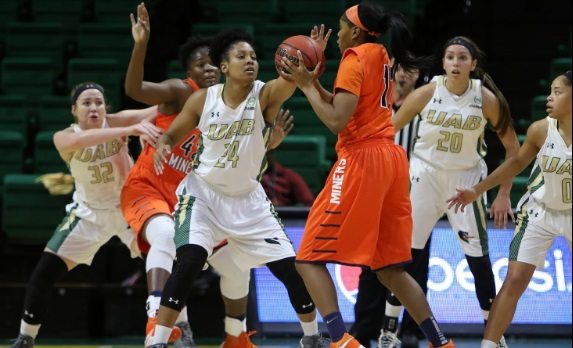 BIRMINGHAM, Ala.- UTEP senior Sparkle Taylor scored 16 points to pace a trio of Miners in double figures but homestanding UAB rode a barrage of three pointers (12-23) to a 74-61 victory at Bartow Arena Thursday evening.

“UAB has a very good shooting team,” UTEP head coach Keitha Adams said. “Our defense just did not come through. Their two best shooters made nine threes; we just didn’t follow through with our defensive assignments. UAB sets a lot of screens and moves the ball well. We just weren’t very good defensively. UAB has a nice club and shot it well.”

UTEP received 11 points from its bench, with Howell, Faith Cook (three) and Roeshonda Patterson (three points) doing the damage. Freshman Rachel Tapps also made an impact with her energy on the defensive end during a late UTEP run.

The Blazers, though, simply had too much firepower on this night. Rachael Childress led the charge by piling up 22 points, the majority of which came from beyond-the-arc. She drilled 6-11 three pointers. Jankeka Williams (12 points, five assists), Miyah Barnes (10 points, four assists), Deanna Kuzmanic (nine points), Whytney Singleton (eight points) and Keonna Farmer (eight points) also got after it for the home side.

Both teams came out firing and it was 7-7 just three minutes into the contest. UAB found some breathing room, though, taking advantage of a couple of UTEP turnovers to rip off seven straight points. Puc put an end to that with a traditional three-point play. After the Blazers went back up by six with a triple from Kuzmanic, Howell’s hoop and some harm got the deficit down to three (18-15, 50 seconds 1Q).

The Blazers countered with a 9-0 run wrapped around the quarter break to take a 12-point edge (27-15, 7:45 2Q). Seda halted the surge with a strong move down low, followed by a pair of Puc free throws and a wide-open triple by Zec to force UAB to call timeout. Williams drilled a jumper to seemingly reinstate order but scores by Seda and Howell got it all the way down to three again (29-26, 3:26 2Q). Unfortunately for the Orange and Blue, UAB answered by closing the quarter on an 10-2 surge to head into half up, 39-28.

The Miners continued to battle in the final frame, using two separate runs in an attempt to get back into the game. UTEP got it down to 10 (61-51, 7:22 4Q) after a 6-0 surge only to have UAB counter. The Miners then put together a 5-0 spurt to whittle the deficit to single digits (67-58) but seven straight points by the homeside dashed aspirations of a late comeback.

UTEP will continue its four-game roadtrip-the longest in league play at the school in 11 years– when it plays at Middle Tennessee at 6 p.m. MST/7 p.m. CST Saturday. The Blue Raiders have won 11 straight C-USA home games and are tied atop the C-USA standings at 8-2 with Charlotte and WKU. The game can be viewed on ESPN3.