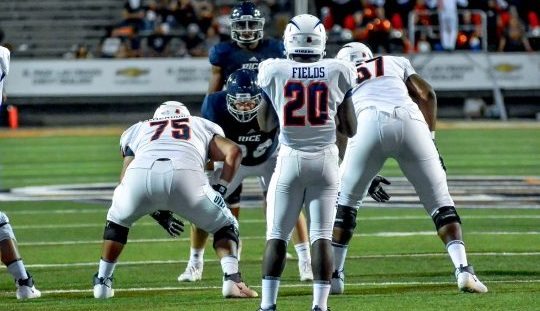 MURFREESBORO, Tn. – True freshman running back and El Paso native Joshua Fields produced a career-high 87 yards on 17 carries (5.1 avg.), but Middle Tennessee halted a two-game skid after getting past UTEP, 30-3, on Saturday night at Floyd Stadium.

“I thought our defense at times played very well, kept us in the game for a while,” UTEP interim head coach Mike Price said. “We just couldn’t do anything on offense. The first half they blitzed us and we couldn’t get a ball off. It was a miserable effort on offense.”

Brent Stockstill, who was a game-time decision, made his first start since Sept. 9 at Syracuse. The junior threw for 190 yards on 13-of-30 passing and three scores. Nik Needham intercepted one of Stockstill’s passes, as it was Needham’s first of 2017 and second in his career.

Middle Tennessee got on the board first after Canon Rooker connected on a career-long 51-yard field goal.

The Blue Raiders then took a 17-0 lead after a pair of Stockstill touchdown tosses. The first came with 16 second left in the first quarter, a 25-yard hookup to Ty Lee, while the second was five-yard pass to Jimmy Marshall in the second quarter at the 4:35 mark.

After a Tavares Thomas two-yard touchdown run to put MT up 24-0, UTEP walk-on kicker Jason Filley got the Miners on the board with his first career field goal, a 26-yard kick with over six minutes to play in the third quarter. The drive went 67 yards on 15 plays (6:46) as Fields gained 61 of those yards on eight attempts.

Fields, on the scoring push, got the Miners past midfield after he gained a career-long 27-yard rush to the Middle Tennessee 48-yard line and hit a first down on a three-yard run on a fourth-and-2 play in the red zone to keep the drive going.

Warren Redix led the offense with 19 yards on a trio of catches.