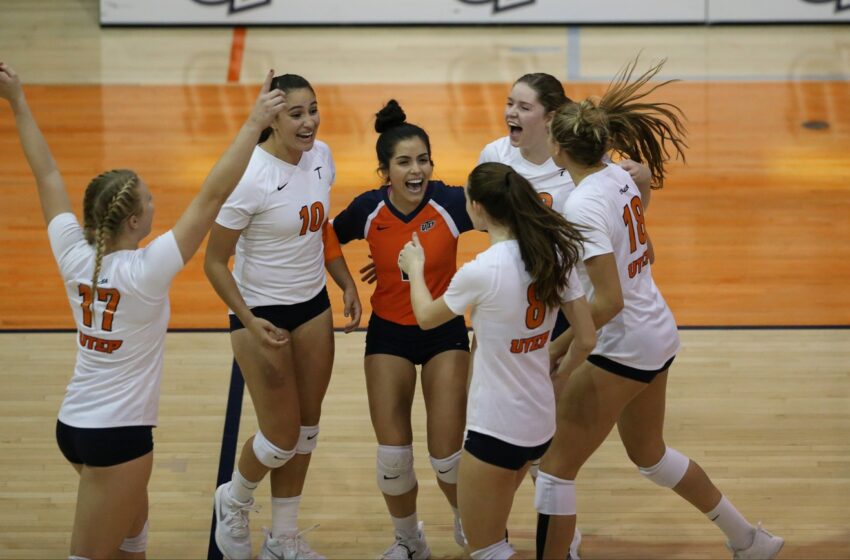 Powered by a defense blocking effort by Kylie Baumgartner and an offensive fifth-set surge by Macey Austin, the UTEP volleyball team slipped by Marshall in five sets on Wednesday in the final home match of the season in Memorial Gym.

Baumgartner notched five block assists and a solo block while also recording nine kills at a .381 clip to lead the team defensively at the net while Austin led the Miners with 15 kills, including six in the fifth to push to the victory.

“That was very nerve racking, but also very fun to play at the same time,” Austin said. “You could feel the energy from us and the crowd and even the other team, so that just made it a good game all around. The energy is the most important thing for our team because it keeps us going. Even if we’re down, if we have that energy we can steal the momentum of the game.”

Marshall took the first frame 25-15 after out-hitting the Miners 14 kills at a .333 clip compared to seven kills. The Miners had a good effort from Baumgartner and Austin, who each had two kills, but the Thundering Herds’ five blocks stopped any offensive run for the Orange and Blue.

“I think we were kind of asleep in the first set and it was just kind of a wake-up call, we didn’t want to end our last game at home like this,” Austin said.

The second set was competitive as the two foes tied six times before the Miners stretched out to a 14-10 lead. UTEP would allow Marshall within one behind a 5-0 run to get to 17-16, before Austin broke the serve with her kill. Arellano and Jones would exchange kills with Marshall’s Madison Hill and Jac’cara Walker before consecutive Herd kills and a Miner attack error tied the frame at 20. Baumgartner would notch another kill, but another UTEP error tied the set at 22. Marshall would not go further than that point, Austin hammered another kill with authority and Arellano ended the set with a service ace to tie to match at 1-1.

“We just kind of start slow sometimes,” head coach Holly Watts said. “It was a good turnaround for us, although the hitting percentages in the second set were really poor but we blocked, they had a lot of errors and we just didn’t have a whole lot of kills but we had them at the right times. That was nice, it was nice to get Kylie [Baumgartner] involved for sure, she had a nice hitting percentage and a good amount of blocks.”

“I think we just realized that we needed to start playing or else it wasn’t going to go our way,” King added. “We knew if we started, we could win. I felt like there was a big switch from the first to the second game.”

Riding on the win’s momentum, the Miners out played the Herd with 11 kills at a .308 clip while seven blocks kept the visitors to 10 kills at a .000 hitting percentage. UTEP struck first after Baumgartner found the hardwood, Morgan and Austin teamed up for a block assist and Marshall’s attack went into the net to go up 3-0 in the third frame. The Miners would never let go of the lead, ballooning to a 14-9 advantage from clutch serving from Arellano and blocks from Baumgartner, Austin and Morgan. The lead grew to 20-12 before a short 5-2 run by the Herd cut the lead to 22-17. Watts called a timeout to regroup and, out of the timeout, Baumgartner recorded a momentum-shifting solo block to end the run. Walker would notch one more kill for Marshall before Austin showed off her power with a kill to end the set 25-18 and put the Miners up 2-1 in the match.

Set three saw a 4-0 start for Marshall, who would then go on to keep the Miners at bay 20-11. A kill by Arellano, three service aces by Morgan, Orozco and Ashley Grzebeniak, a block assist by King and Baumgartner and errors by Marshall would propel the Miners to cut the lead to 23-19, but the Thundering Herd’s offense kept rolling to put the set away 25-20 and tie the match 2-2.

The decisive fifth set saw five ties between the conference foes, but Marshall got out to a short two-point lead before Morgan’s kill and an attack error by the Herd again knotted things up at 11. Austin and Jones would answer Marshall’s kills with one of their own, before Arellano notched another kill and Baumgartner followed suit to bring up match point for the Miners in extra points, 16-15. Marshall called a timeout to attempt to slow the run, but Austin would remain unfazed, hammering down her 15th and final kill of the match to give the Miners the 17-15 win and the 3-2 match victory on their home court.

“It’s so fun to play in those tight situations because it’s a lot of pressure but you know that you’re confident in your abilities so you just do what you know and hope for the best,” Austin said.

The Miners will have one more match to close out the 2017 season, a Sunday evening meeting with New Mexico. First serve against the Lobos in Albuquerque is set for 5 p.m. MT.

“The last set [against Marshall] was crazy, they gave us some opportunities and we took advantage of them so that was nice,” Watts said. “We’ve had chances in the past that we didn’t take advantage of so it was good to be here at the end of the year to take advantage of those kinds of things. We’re excited for the future.”