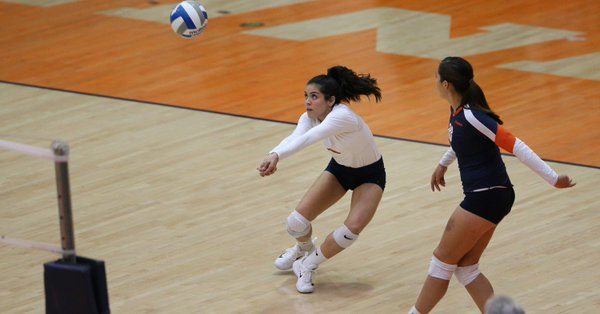 While Yost’s and Jones’s kills lead the offense, Macey Austin chipped in eight kills of her own and Amanda King recorded her fourth double-double of the season with 33 assists and 10 digs. Dania Orozco manned the UTEP defense with a career-high 20 digs while Niki Cebak reached 11 digs. Yost led the blocking effort at the net with three block assists, while Austin, Kylie Baumgartner and Jones each recorded two block assists.

“Double-digit performances by our seniors, Amanda [King] and Dania [Orozco] weren’t enough to produce kills consistently,” head coach Holly Watts said. “We were hoping battling to win the third set would spark the team, but we couldn’t find a way around the block from FIU.”

The Panthers hit at their best percentage of the match (.444) to control set one. Jones notched three of her 10 kills to help the Miners, but FIU’s eight block assists and one solo block kept the Miners at bay as they the Panthers took the set 25-14.

Set two saw the Miners’ offense get rolling, as Yost hammered four kills while Baumgartner and Jones each chipped in three. Orozco picked up eight digs in the set to keep the Panther offense working for each point, holding them to a .140 clip.

The Miners started rolling in set three, climbing out of a 15-10 deficit to push to tie the set at 19. A 5-0 run for UTEP was started with back-to-back kills by Austin followed by an attack error by the Panthers. Orozco, who served throughout the rally, then served up an ace, while the Panthers had consecutive attack errors.

FIU went on to score three unanswered points, but a service error brought up King to serve for UTEP. King came through with an ace, which was followed by a block assist from Yost and Jones. Though King’s next serve went into the net, Jones recorded another kill to tie the set at 20 and set up Cebak’s serve. Another attack error and an ace by Cebak put the Miners up by two, prompting a Panther timeout.

The Panthers got a kill out of the break and blocked Jones’ attack, but Yost responded with a kill. The teams would exchange points before King surprised the FIU defense with a kill and Arellano’s serve went untouched for an ace to end the set 26-24.

Though kept pace with the Panthers in set four, a 5-0 run by FIU kept them up 20-16. Yost and Jones would record kills and FIU’s serve would go out of bounds to get the Miners to 19 points, but the Panthers prevailed for the 25-19 set victory and the 3-1 match win.

The Miners will look to bounce back on Sunday when they take on FAU in Boca Raton, Fla. First serve against the Owls is set for 10 a.m. MT.