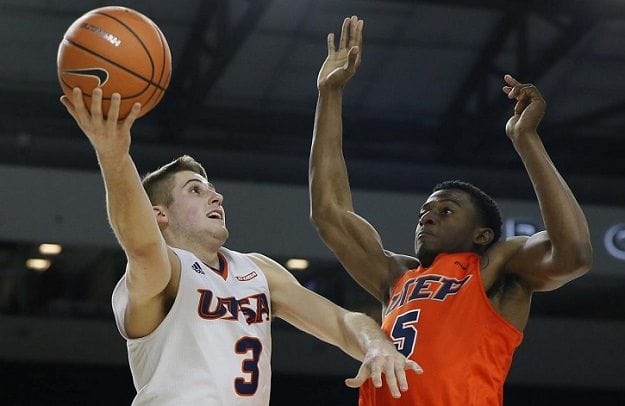 Evan Gilyard scored a career-high 29 points, but UTEP could only muster 58 as a team in bowing out of the Conference USA Championships to UTSA on Wednesday night at The Star in Frisco 71-58.

UTSA (19-13) completed a three-game sweep of the Miners (11-20) during the 2017-18 season.  It was a similar storyline to the first two meetings between the teams, where UTEP had trouble scoring and UTSA dominated the rebounding battle.

The Miners tallied 61, 59 and 58 points in three games versus the Roadrunners with a rebound margin of -11.7 per outing.  The first two games were close; this one wasn’t after UTSA built a double-digit lead (30-18) 13 minutes into the contest.

“You know, it’s really disappointing,” UTEP Interim Head Coach Phil Johnson said.  “Obviously we played those guys twice in two tough games, kind of down to the last minute.  And then for them to get away from us like they did was really disappointing.  We didn’t rebound the ball very well at all and we really stressed it.  But I’m proud of our guys.  Listen, we won four of our last six coming into the game.  We never gave up.  We kept fighting.  We had some tough losses at Old Dominion and other places.  But I give our guys credit and all our coaches credit.”

Epitomizing the Miners’ troubles, they forced a missed three-pointer by Allen with 4:46 remaining.  Secure the defensive rebound, and they’re headed the other way trying to cut it to single digits.  But instead, 6-5 Deon Lyle outmuscled the Miners’ big men for the offensive rebound and putback, making it 66-54 on a backbreaker of a play.

Gilyard made 10-of-25 shots and all six of his free throw attempts.

“He has the heart of a lion,” Johnson said.  “Whoever coaches him next year and for the rest of his career has got a heck of a point guard.  He showed it again tonight and I’m really proud of him.  I’m proud of all of our team for not giving up all year.  We had a really tough stretch there, we played tough teams and we didn’t check it in.  That’s what I’m proud of.  And I thought we were hard to play.  Tonight was really not indicative of what we have been doing the last three weeks.  We didn’t defend or rebound the way we have been.”

Byron Frohnen had a big first half for UTSA (13 points, 6-for-8 FGs), and Lyle had a big second half (15 points).  Frohnen recorded his first double-double of the season (14 points/14 rebounds) with six assists, and Lyle scored 18 points.

“They went in a zone and played a zone for 40 minutes,” Johnson said.  “We knew it would be 30 minutes plus of zone.  We spent three days trying to attack the zone.  We put some new sets in and really wanted to move the ball and there just wasn’t a lot there.  We wanted to try to get it down in the short corner and it didn’t happen a whole lot and it just wasn’t very effective obviously, scoring 58.  We knew we needed to score at least 70 to win.  We scored 58 and it’s not good enough against them.”

“They’re real fast, they seem like they made everything early,” Johnson said.  “Frohnen was throwing in some teardrops and floaters from everywhere.  We were helping off of Frohnen and he really got us early.  And then Lyle got going late, particularly in the second half.  We wanted to attack the zone with a lot of the sets and basic movement and motion and get it down low to Matt.  It just didn’t work out.  We missed some open shots and probably took some ill-advised shots.”

The Miners failed to advance in the C-USA Tournament for the first time in nine years, and for only the second time in the last 11 years.