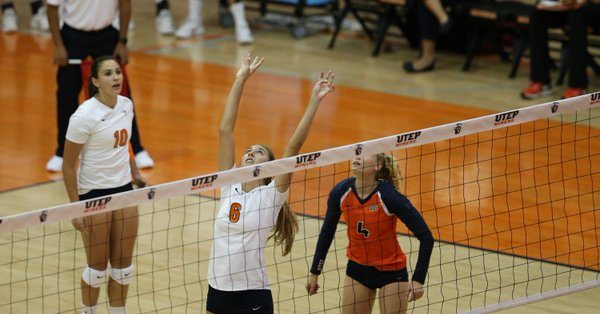 Sunday’s contest was a rematch from a Sept. 22 meeting in which UTEP upset Rice, 3-2 in Memorial Gym. After Sunday’s win, the Owls have won eight consecutive matches. Rice’s last loss was against UTEP, while the Miners handed the Owls their lone league loss.

Macey Austin led the Orange and Blue with 20 kills and fashioned a .273 hitting average (44 total attempts). It was Austin’s fourth most kills of 2017, as she’s hit 20-plus in three previous matches.

After the first-set letdown, the Miners came out firing in the second stanza, coming out on top, 25-22, to tie the match. The Owls had taken an early 4-2 advantage after a kill by Grace Morgan to start the second set. UTEP responded with a 3-0 run to take a 5-4 lead, while building its lead up to 13-8 at the midpoint.

Rice would respond as Portia Okafor gave her squad a late 18-17 advantage after back-to-back points. UTEP though, stepped up and outscored Rice 8-4 down stretch. Kylie Baumgartner tied the match with a kill, while Cheyenne Jones recorded a service ace for a 19-18 edge. After Rice got within a point (22-21), Austin upped the lead to 23-21 with a kill.

Mallory Yost gave the Miners a 24-22 lead, while an attack error by Rice lifted the Miners to victory.

UTEP would eventually take lead after winning the third set 25-20. The third was tight as both squad fought in a back-and-forth battle. UTEP built a 16-13 lead, which had matched the biggest lead to that point, after a kill by Austin. The Owls took advantage after back-to-back attack errors by the Miners to get within a point (16-15), but the Miners went on a 9-5 run to finish the set, in which Austin put an exclamation point on the triumph with a kill to give her team the 2-1 lead.

The Owls, however, showed why they are one of the league’s top programs as they tied the match 2-2 after a 25-16 victory. In the third set, Rice built a 12-6 lead after an Okafor kill. The Miners got within five points (15-10), but couldn’t get any closer to avoid a fifth and deciding set.

In the fifth, the Owls and Miners, once again, battled. Rice jumped out to a 5-2 lead, but the relentless Miners took a 6-5 lead after Amanda King recorded a service ace. After exchanging points during the intense fifth set, UTEP tied it 12-12 after an Austin point. But Rice rallied to score the next three points to win its eighth match in a row.

Jones finished with nine kills and a team-best three service aces, while Briana Arellano registered seven points and Amanda King six kills with a .364 hitting average. King led the team with 37 assists and Arellano paced the squad with 13 digs.

The three remaining road matches are at FIU (Nov. 3), Florida Atlantic (Nov. 5), while the season-finale is at New Mexico (Nov. 12).