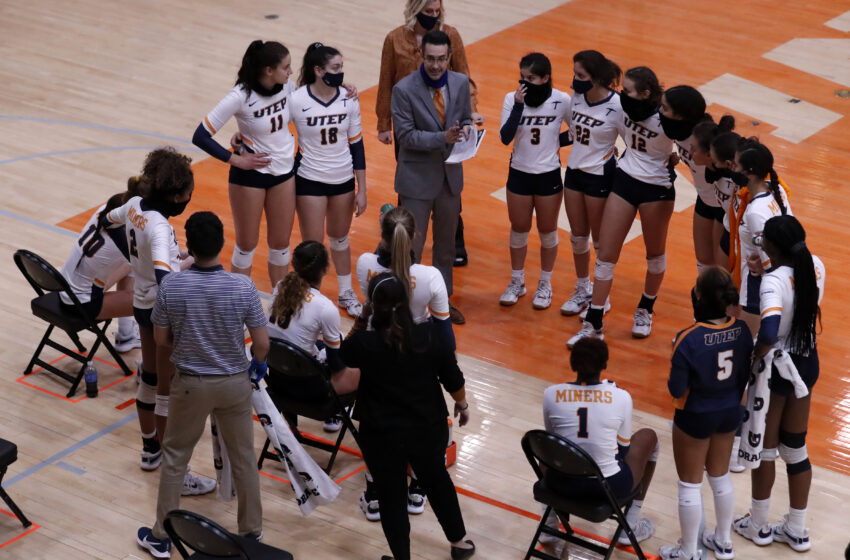 The UTEP Volleyball team released its 2021 schedule Tuesday morning, headlined by nine home matches in Memorial Gym, and a continuation of the two-match C-USA series format introduced in the 2020-21 season.

“I’m extremely excited to get our fans back into Memorial Gym to see this team play,” head coach Ben Wallis said. “In two years, our program has shown significant progress and we’re very ready to get our El Paso fans back into the stands and have them get loud.

“We have a great, historic, loud facility and we’re looking forward to it being a home court advantage again. We need Miner fans to get back out to campus and use their voices to cheer this team on. We’ve added seven exciting new players to our roster to join the returners who led us to some historic changes last season.”

UTEP will open its regular season on the road Aug. 27 and 28 in Potacello, Idaho, participating in the Idaho State Tournament featuring its host, Seattle and UC Irvine.

“We open the year in Idaho versus a WAC opponent (Seattle), a Big West opponent (UC Irvine) and one from the Big Sky (Idaho State),” Wallis said. “All three teams present different challenges and we’re looking forward to that opening weekend to see where we are physically and mentally from a really solid 2020 campaign.”

The Miners return to El Paso to co-host the Borderland Invitational with NM State from Sept. 3-5. UTEP will square off with its only two Power-5 opponents on the schedule on Sept. 3 versus Arizona at 10 a.m. in Las Cruces, N.M., and Northwestern for its first home match of the season in Memorial Gym at 7 p.m.

The Battle of I-10 will commence the next day in El Paso versus NM State at 1 p.m.

“In the second weekend, we host three top 50 RPI programs,” Wallis said. “Arizona is a perennial PAC-12 power, Northwestern is always good in the Big-10 and NM State is consistently a top 50 team and has won or finished second in the WAC for 10 years in a row.

“(NM State) is a rivalry game and will be able to wrap up a really tough weekend of playing learning a lot about our competitiveness at the top end of the college volleyball world.”

UTEP travels to the Pacific Northwest from Sept. 10-11 to partake in the Portland State Tournament featuring its host, Grand Canyon and Portland.

The Miners complete their string of  tournaments in the Texas A&M – Corpus Christi Tournament with three matches versus Texas State, TAMUCC and Tarleton State from Sept. 17-18.

“In the fourth weekend, we’ll be tested once again by Texas State and TAMUCC who are both reigning Conference Champions (Sun Belt and Southland, respectively),” Wallis said. “Tarleton State is a program on the rise who had significant wins last season and has had a long run of successful seasons under its head coach Mary Schindler.”

September 17th’s match with Texas State will mark the third meeting in the last two years between the two programs. Most recently, the Miners upset the Bobcats in four sets to hand Texas State its first home loss since Dec. 1, 2017. Texas State went on to reach the NCAA Tournament last season.

UTEP finishes its preseason schedule on Sept. 23 in Edinburg, Texas, to play UTRGV at 5 p.m. The Miners and Vaqueros will meet in the middle of UTEP’s C-USA schedule on Nov. 2 at 6 p.m.

“This schedule is tough, and we made it that way in order to get us ready for our very tough conference schedule,” Wallis said. “C-USA is a top volleyball conference and to win the Conference USA Tournament and beat the likes of Rice and Western Kentucky, who are the perennial winners and favorites again, you have to be battle-tested come October.”

The first two matches of C-USA play will be on the road in Houston, Texas, as the Miners take on the reigning C-USA West Division Champion Rice Owls on Oct 1 and 2 at 12 p.m.

The Owls swept the Miners in their two-match series last season. Rice received an at-large bid to the NCAA Tournament but was forced to drop out following a positive test and subsequent contact tracing within its program.

LA Tech comes into Memorial Gym the following weekend for UTEP’s first C-USA homestand on Oct. 8 and 9 at 12 p.m. and 11 a.m., respectively. The Miners swept the Lady Techsters in straight sets in both meetings last season.

UTEP returns to the USM Wellness Center after last year’s C-USA Tournament to face Southern Miss on Oct. 15 and 16 at 4 p.m. and 10 a.m., respectively. The Miners closed out their regular season in 2020-21 on a 12-set winning set following back-to-back straight-set victories over the Golden Eagles.

UTEP and UAB will meet the next weekend in Memorial Gym on Oct. 22 and 23 at 6 p.m. and 12 p.m., respectively. The two programs split last year’s series in Birmingham, to open the C-USA regular season.

After defeating UTSA for the first time in 10 years on Feb. 22, 2021, and eventually sweeping the season series versus the Roadrunners, the Miners will look to start a lengthy winning streak of their own against their I-10 rivals. The two matches in San Antonio, Texas, on Oct. 29 and 30 at 1 p.m. and 12 p.m., respectively, will close out the month of October.

UTEP will end its regular season at home when it squares off with North Texas on Nov. 6 and 7 at 7 p.m. and 1 p.m., respectively. The two teams played two hotly contested five-set matches last season in Denton, Texas, that witnessed some of the country’s best single-match team performances of the year.

In the Miners’ 3-2 loss on Feb. 28, 2021, UTEP tallied 75 assists – the NCAA’s second-highest assist output in a match last season. The Miners also powered home an outstanding 77 kills in the loss. UTEP would have the last laugh the next day after notching its first win inside the North Texas Volleyball Center since 1994.

The Conference USA Tournament is scheduled from Nov. 18-21 in Norfolk, Va. Times are TBA.