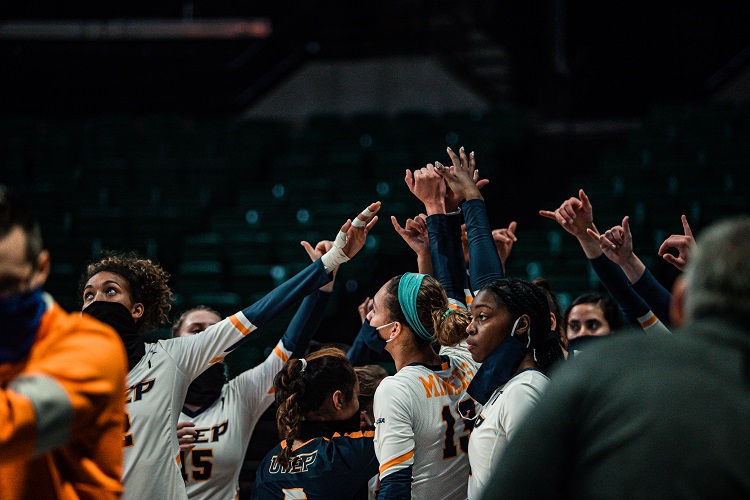 BIRMINGHAM, Al. – Junior libero Hula Crisostomo reminded the team of what they were capable of after the Miners lost in five sets yesterday.

“Hey, we lost to Texas State in five sets and we beat them the next day,” Crisostomo said. “Let’s do it again tomorrow.”

“It was very poignant for (Crisostomo) to say that,” head coach Ben Wallis said. “But it was kind of how everybody felt when she said it. And they showed it and went out and proved it today.”

To Wallis, those victories rallying from defeat signify something much greater than any ordinary win.

UTEP’s Achilles heel in its loss to the Blazers, 3-2, yesterday was production from the left side. Outside hitters Serena Patterson, Paulina Perez Rosas and Ava Palm had just 19 kills between them while UAB’s Caroline Stogner and Fernanda Maida combined for 34.

Today, in three sets, Patterson and Palm posted a team-best 12 kills apiece. Both of the Blazers’ right-side hitters finished the match with a negative hitting percentage, and the team finished with a .073.

Palm started the match – a switch-up from yesterday – and swung for three kills in the first set including the Miners’ final two points, 25-23.

“I was very happy and grateful for the opportunity (Wallis) gave me today,” Palm said. “I knew if I was out there, I could have (gotten us more kills).”

UAB’s Alex Kells picked up three kills and half a block as the Blazers went up 17-15 in the second set. After a kill by senior outside hitter Cheyenne Jones, shrinking the deficit to one, junior setter Kristen Fritsche stepped to the service line and dealt two aces and forced three attack errors.

“Our plan was to attack their outsides with the serve,” Fritsche said. “That forced them to scramble which allowed us to get an easy ball back for us to kill and get the momentum back on our side in the second set.”

Palm picked up an additional two points with another kill and a service ace of her own as the Miners finished the second frame on a 12-2 run.

Fritsche found Darley, who struggled earlier in the match, in the middle of the third set for back-to-back kills to put together a 4-0 run and take the lead, 17-13.

“(Fritsche) felt comfortable in the third set to pop a couple balls back to (Darley) and she got kills when she needed it,” Wallis said. “So good for Kristen for knowing her girl there and executing it.”

Patterson powered home her final two kills for UTEP’s next points, finishing the day with a .323 hitting percentage as the six rotation outside hitter.

“(Patterson) decided that she just wanted to be a big dog today,” Wallis said. “She was a monster. Her and Ava really helped us win today.”

As the Miners wrapped up the third set, five separate players denied the Blazers on three assisted blocks: Jones and redshirt sophomore Kenidy Howard, sophomore Jessica Landeros and Palm, and Darley and Landeros once more.

“We just suffocated them,” Wallis said.

UTEP went on runs of three-or-more points on nine different occasions throughout the match with four in the first set, three in the second and two in the third. All of them featured a point from the service line in one form or another, whether it be an ace or error on UAB.

The Miners also never trailed or were tied after they scored their eighteenth point of each set.

“We didn’t look disheveled in our demeanor,” Wallis said. “Everyone was in control and they just knew they were going to go on a little run. And that’s what you’ve got to do against a good team.”

Up next, UTEP volleyball hosts its first matches of the season in Memorial Gym next Sunday and Monday on Feb. 21 and 22 at 12 p.m. and 11 a.m. MT, respectively.