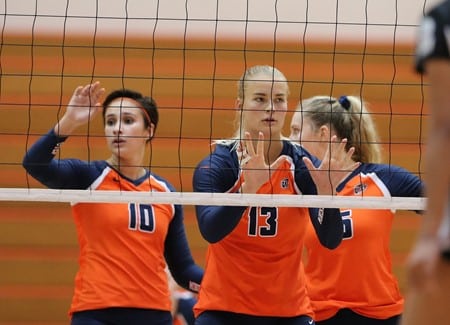 The UTEP volleyball team (2-6) dropped a match to Montana (2-7) in three sets on Saturday morning at Memorial Gym.

Macey Austin’s 16 kills led the way for the Miners in their 2018 home opener. Mallory Yost posted eight kills and notched an impressive .444 hitting percentage. Martine Kragholm and Cheyenne Jones both added four blocks to the Miner effort, as well as Yost pitching in three of her own. Kristen Fritsche had a match-high 34 assists.

The Grizzlies got off to a hot start, scoring the first five points of the first set. UTEP would tie things up at 12-12 after a kill by Austin. Back and forth action would ensue between the teams, with both jockeying for winning position. The Miners stayed within one point, facing set point, 24-23, but Montana would capture the set.

After 11 ties in the second set and the score knotted up at 23-23 the Grizzlies took control, seizing the final two points of the set.

With UTEP’s back against the wall it raced out to a 6-1 advantage. Montana would battle back to tie the set at 13-13. The Grizzlies then held match point, 24-20, over the Miners. Yost with a kill kept UTEP’s hopes alive and sparked a 4-0 run to tie the set again at 24-24. After facing match point on six occasions, the Miners finally fell, 28-26, and the Grizzlies completed the sweep.

Watts’s Thoughts
“There was great fight by our team today,” head coach Holly Watts said. “We got down a couple times and had a hard time digging ourselves back out of the hole. We had some great production out of Mallory Yost in the middle.

Macey (Austin) had another great game, hitting double-digits in kills. We can certainly do a better job blocking and playing defense. We have to brush this one off and be ready for New Mexico State on Sunday.”