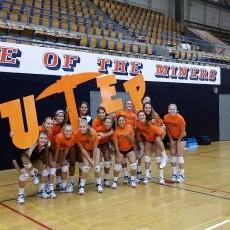 Match 1 vs. Memphis
UTEP got off to rough start in the first frame as Memphis took a 5-0 lead. UTEP struggled to catch up and ultimately the Tigers took the set 25-12. The Orange and Blue defeated Memphis 25-18 in the second set after being tied eight times. The Miners could not overcome the offensive firepower of the Tigers and ultimately dropped the third and fourth frames (18-25, 16-25) and the match 3-1.

Match 2 vs. Belmont
UTEP and the tournament host, Belmont, faced in a point for point battle for the second match of the day. After a devastating loss to Memphis, the Miners started off the match with a 26-24 triumph in the first frame. Tied at 18 in the second set, UTEP took a timeout to regroup but the Bruins were able to gain the lead and finished 25-21. UTEP was held to a .085 attack percentage in the third set and -.023 in the fourth giving the Bruins a 3-1 victory.

The Miners will finish up the Belmont Bruin Invitational Saturday at 10 a.m. (MT) in a match-up against the South Alabama Jaguars at the Curb Event Center.