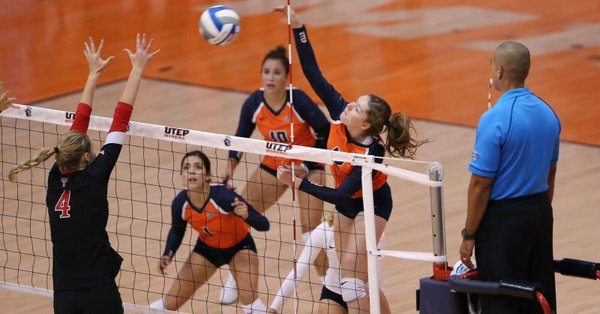 The Miners will return Saturday for a double-header in Memorial Gym, first at 1 p.m. (MT) against the Youngstown State Penguins then a 7:30 p.m. (MT) meeting with the North Dakota Fighting Hawks to close out their home tournament. The Penguins, who played a double-header on Friday, fell to both New Mexico and North Dakota.

Pacing the Miners’ offense was Macey Austin, who notched 10 kills with a .273 clip. Ashley Grzebeniak was an all-around force for her team, knocking down eight kills, recording a block assist and picking up nine digs.

“I think Dania passed really well, Grzebeniak played a full rotation for the first time this year, Maddie and Mallory switched really well and every one had to do a little more than last time and so we had a few mistakes but played well overall,” head coach Holly Watts said. ““We are expecting our team to be fresh for tomorrow and use today as a learning experience. We win or we learn more and continue to build as a team.”

The Miners started strong with a competitive New Mexico squad, going head to head and having an answer for each Lobo attack. Grzebeniak knocked down a kill to bring the Miners within one point of the Lobos, but New Mexico’s Mariessa Carrasco answered back with a kill of her own to bring the score to 23-21, and the Lobos never looked back, taking set one 25-22.

A fired-up New Mexico squad handled set two 25-18, but the aggressive Miners did not go down in set three without a fight, climbing from a 10-point deficit to challenge the Lobos 23-21 before ultimately falling 25-22.

“We’re still working on the chemistry of this team and even with two seniors on the team [Orozco and Amanda King] they are junior transfers who are playing their second year here,” Watts said. “We’re young, Jjust getting used to the players next to you and having these games will help this team get better. Playing four games in four days is good for their experience, it’s a lot more fun playing against somebody else than practicing against each other.”