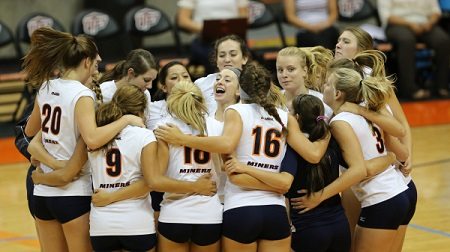 UTEP opened set one with a 3-0 start before Courtney Ensch delivered a kill that initiated a 9-1 run from Texas Tech to put them up, 9-4, and forced the Miners to call a timeout. The Red Raiders came out of the break to a service error but quickly regained rhythm and never looked back. Tech claimed the first point of the match with a 25-16 victory in game one.

The Red Raiders flipped the script in the second frame, starting with a 3-0 lead. The Miners responded with three consecutive kills to tie the set, 3-3, but a 5-0 run put up Tech, 8-3. UTEP was unable to recover from the early deficit and dropped the stanza, 25-15.

Eager to turn things around in the third period, the teams fought back and fourth, tying the score 18 times and switching the lead seven times. With the score knotted at 20, Tech was forced to call a timeout after the Miners put up a 3-1 rally to gain a 23-21 lead.

After regrouping, the Red Raiders went off on a 3-0 run to reclaim the lead by a point and UTEP called a timeout of its own. An attack error from the Miners handed Texas Tech the set, 25-23, and the match, 3-0.

The Orange and Blue will open its home slate next weekend as it co-hosts the Borderland Invitational with NM State. The Miners will take on Texas A&M at 12 p.m. (MT) and Sacramento State at 6:30 p.m. (MT) on Saturday in Memorial Gym.