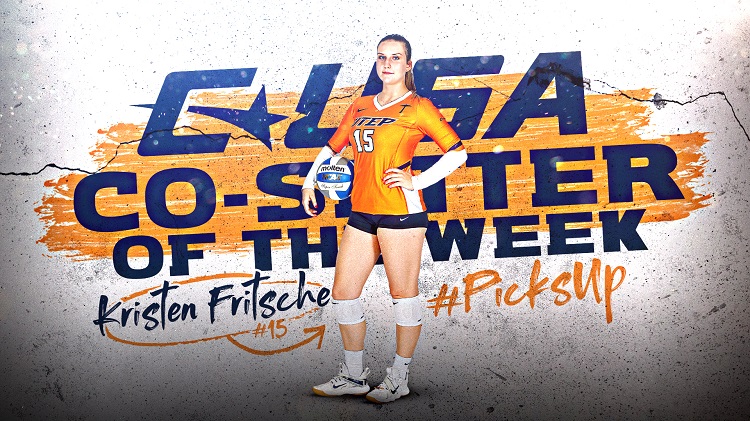 DALLAS – After helping UTEP go 3-0 at the Bengal Invitational to win its first tournament championship in 10 years, senior setter Kristen Fritsche has been named as the Conference USA Volleyball Co-Setter of the Week, the league office announced Monday.

She becomes the first Miner to earn the league’s Setter of the Week honor in six years, with Lindsey Larson last taking home the honors on Nov. 9, 2015.

Fritsche, who was voted to the All-Tournament Team at the event, was instrumental in the Miners picking up three wins in two days to get them off to a 3-0 start for the first time since ripping off eight straight to begin the year in 2011.

“I’m really fired up for Kristen to get some well-deserved recognition in the conference for her accomplishments as a setter,” UTEP head coach Ben Wallis said.

“Our conference coaches got together in the offseason and, rightly so, changed the criteria in the setting category to incorporate not only the changing dynamics of offensive systems in the world of college volleyball, but also created an ability to recognize a specific setter that was exemplary in a two setter system which was the right thing to do.

“We had several setters nominated this week that were worthy and many of them put up really impressive numbers, including Kristen,” Wallis said. “She set at 38%, 67%, and 50% efficiency in the three matches this weekend. Those are crazy good numbers. I’m just very proud of the work she’s put in learning how to be a complete setter with Nikola (assistant coach Nikola Petrovic). She spends a lot of hours watching the video not only on herself but her opponents in order to be prepared for that efficiency.”

She racked up 66 assists (6.0 assists/set) without a single BHE. She also notched 21 digs (1.91/set), including 10 for a double-double (18 assists/10 digs) in the sweep vs. Seattle U. Additionally Fritsche recorded seven aces during the course of the tournament.

“The fact that our coaches recognized the need to rework the weekly awards and she was chosen in week one with the WKU setter is a really neat accolade for her and for our program’s offensive growth,” Wallis said. “It is well deserved and I know she’s already watching or has watched video on herself and her opponents for these three tough matches coming up.”

UTEP returns to action as it co-hosts the Borderland Invitational with NM State on Friday (Sept. 3) and Sunday (Sept. 5). The Miners face Pac 12 foe Arizona in Las Cruces at 12:30 p.m. MT Friday (Sept. 3) before hosting Big 10 member Northwestern at 7 p.m. MT (Sept. 3) in their home opener.

Tickets are $8 and can be purchased through the Eisenberg Family Ticket Office by calling (915) 747-UTEP, emailing tickets@utep.edu, going online, or in person at 201 Glory Road (Brumbelow Building, UTEP campus) Monday thru Friday from 8 a.m. to 5 p.m. Season tickets are also still on sale. Group tickets are also available for $5 (minimum of 10 tickets).