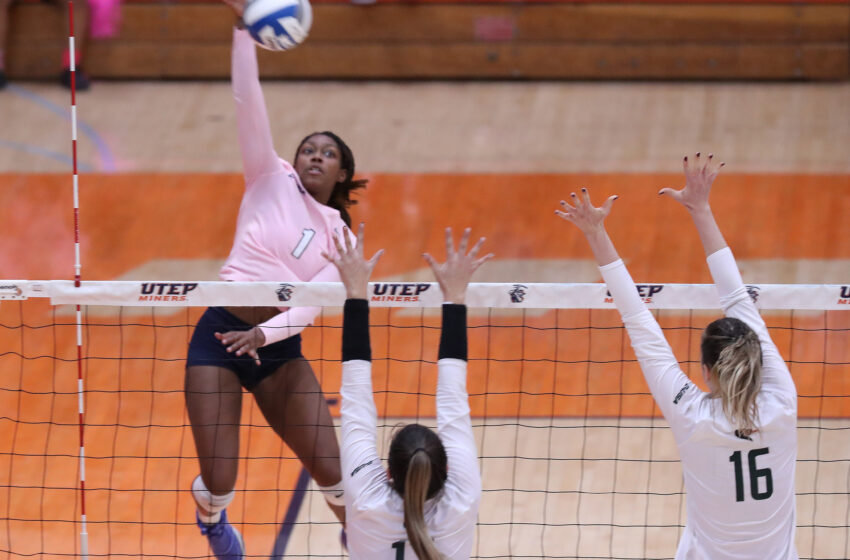 “These matches are big for us,” head coach Ben Wallis said. “If we can take care of business here at home, we put ourselves in a better place for the conference tournament. If we can’t, then it’s going to be harder for us come tournament time. That is all dependent upon how we do against North Texas.

“When you have hiccup on the road against UTSA and you’re a game behind in the standings, it puts more pressure on you,” Wallis said. “What I like about my team is that they’ve played and performed well under pressure all year. We have weapons and we have a team that is built to be able to run somebody else off the bench and score and block and defend.”

Alyssa Sianez achieved back-to-back career-high total digs in a pair of matches against UTSA. She had 29 digs on Oct. 29 and followed that performance with 31 digs on Oct. 30.

Hitting with Consistency
UTEP has hit .300 or better 10 times total on the season, including four matches higher than .350. The opposition has only topped .300 twice in 23 contests on the campaign. Five Miners are swinging better than .250 on the year. Vittoria Price (.457) continues to lead the team among players with at least 75 kills.

Block Party
The Miners registered a season-high 14 blocks in the 3-0 win against Louisiana Tech on Oct. 9. UTEP has posted at least 10 blocks in 10 matches this season. Alianza Darley (85), Price (71), Kenidy Howard (70), and Ema Uskokovic (57) each have tallied at least 50 total blocks to lead the charge.

Miner Rankings
In Conference USA, UTEP is ranked in the top three in nine different categories:

Scouting North Texas
North Texas is 15-9 (7-3, C-USA) on the year, recently coming off a victory over Tarleton State via the sweep. The Mean Green have won six of their last seven matches and eight of their last 10 overall. Nationally, UNT is currently ranked top 50 in two categories: coming in 39th in hitting percentage (0.254, 4th C-USA) and 50th in team kills (1,179, 3rd C-USA). The program is led offensively by senior outside hitter Rhett Robinson with 426 kills (5.46 kills/set) and graduate setter Kaliegh Skopal with 643 assists (9.89 assists/set). On the defense, redshirt-senior defensive specialist Henrianna Ibarra paces the squad with 314 digs (3.57 digs/set) and 26 service aces while senior middle blocker Sarah Haeussler leads the team in blocks (98, 21 solo/77 assists).

“The problem is we’ve got a team in front of us that’s pretty athletic and they have one player that can win the game on her own and that’s Rhett Robinson,” Wallis said. “They’ve also got a senior setter who’s got a lot of experience and knows what she’s doing.”

The Series vs. UNT
UTEP is 9-12 against UNT, and the first meeting was back in 1981. Under head coach Ben Wallis the Miners are 3-1 against the Mean Green. In the last three meetings, each match has gone into five sets.

“We’ve got our work cut out for us,” Wallis said. “The pressure is there. It’s going to be two exciting matches and it’s going to be hard. The city is going to see two really good teams battle it out here at the end of the conference season to see who gets placed where. We’re looking forward to it, but it’s going to be tough.”

Tickets are $8 and can be purchased through the Eisenberg Family Ticket Office by calling (915) 747-UTEP, emailing tickets@utep.edu, by Clicking Here or in person at 201 Glory Road (Brumbelow Building, UTEP Campus, Monday thru Friday from 8 a.m. to 5 p.m. Group tickets are also available for $5 (minimum 10 tickets). The matches will be live streamed on CUSA.tv, with live stats available.