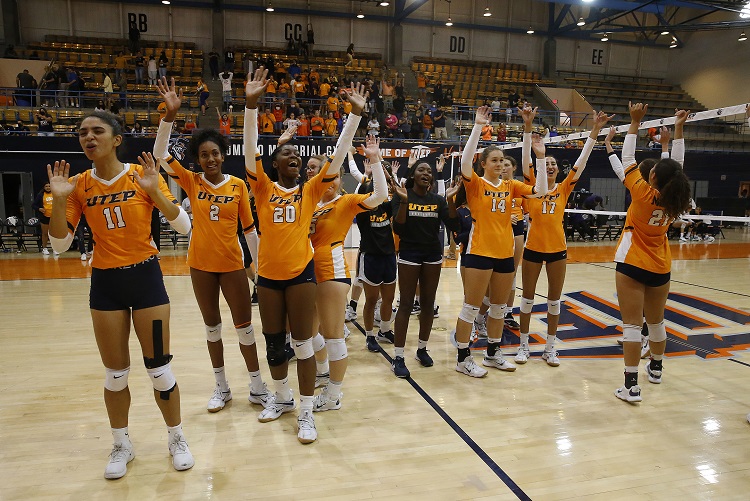 “We are really looking forward to playing at home in front of our Miner Maniacs,” head coach Ben Wallis said. “We’re excited to get our home crowd back out in front of since they last got to see us against NMSU way back in early September.

“We’re looking forward to getting our first C-USA win of the 2021 season,” Wallis said. “It’s not going to be easy because LA Tech has improved. They don’t have these big giant physical weapons like some of our other opponents we’ve played this season, but they play good volleyball, they serve it tough and pass it well.”

Tickets are $8 and can be purchased through the Eisenberg Family Ticket Office by calling (915) 747-UTEP, emailing tickets@utep.edu, going online or in person at 201 Glory Road (Brumbelow Building, UTEP Campus) Monday thru Friday form 8 a.m. to 5 p.m. Group tickets are also available for $5 (minimum of 10 tickets).

The matches will be live streamed at CUSA.tv, with live stats available.

Hitting with Consistency
UTEP has hit better than .250 nine times total on the season, including four matches at .301 or above. The opposition has only topped .250 three times in 14 contests on the campaign. Eight Miners are swinging better than .250 on the year. Vittoria Price (.404) leads the team among players with at least 15 kills.

Block Party
The Miners registered a season-high 13 blocks in the 3-1 win at UTRGV on Sept. 23. UTEP has posted at least 10 blocks in six matches this season. Alianza Darley (54), Kenidy Howard (38), Ema Uskokovic (38), Price (37) each have tallied at least 35 total blocks to lead the charge.

Serena Patterson is the fourth Miner in program history to lead the team in kills for three consecutive years (2019-2021). Her predecessor, Macey Austin, led the campaign in kills from 2016-2018.

Scouting LA Tech
LA Tech is 6-12 (0-4 C-USA) on the year, recently losing via sweep to North Texas. Nationally, the Lady Techsters are currently ranked fifth in team digs (1,127) and 16th in digs per set (17.34). The program is led offensively by Faith Menary with 161 kills (2.93 kills/set). Menary recorded her fourth double-double of the year with 10 kills and 14 digs against North Texas. Redshirt-sophomore setter Mallory Meers is rated first on the team in assists (409, 7.57 assists/set). On the defense, sophomore outside hitter McKenzie Johnson paces the squad in aces (23) and in digs (342, 5.26 digs/set) while sophomore middle blocker Morgan Smith leads the way in blocks (60).

In Conference USA, Johnson currently ranks first in total digs (351, 2nd NCAA), first in digs per set (5.40, 10th NCAA) and third in service aces (23, 63rd NCAA) while Smith comes in seventh in total blocks (62) and tenth in blocks per set (0.95). Johnson set a new school record with 36 digs in a single match and has recorded double-digit digs in 16 straight games.

The Series vs. LA Tech
UTEP is 12-8 against LA Tech, first meeting back in 1994. Under Coach Wallis, the Miners are 1-2 against the Lady Techsters.

“It was a good eye opener for us this past weekend at Rice to see where we’re at and to see how far away we are from beating the crème of the crop in the conference,” Wallis said. “Now we have to take care of the match on Friday at home by getting out there with the weapons we have.

“LA Tech is the next foe in our way and we want to do everything in our power to try to push them around physically on Friday and Saturday and get a couple of wins.”