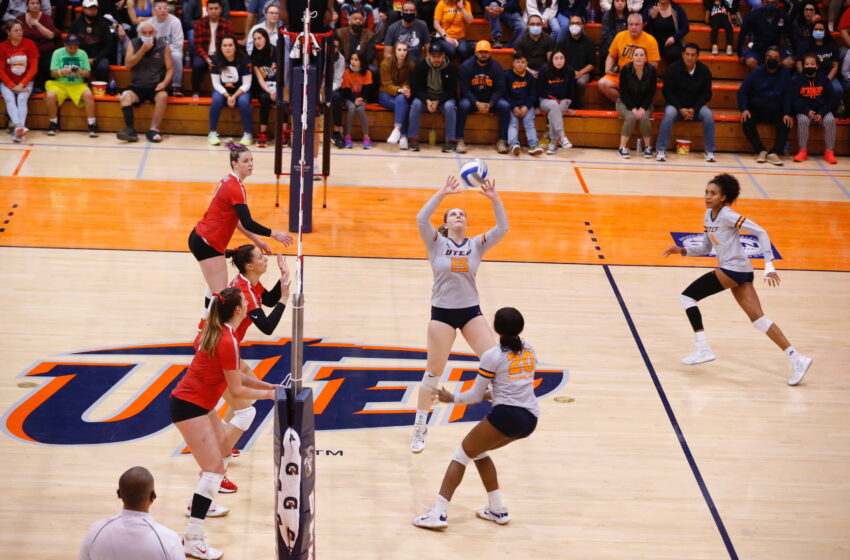 The Miners won the first set convincingly before the Rebels claimed the final three sets.

“I’m really proud of this group and I loved coaching them,” head coach Ben Wallis said. “They went out there giving El Paso and UTEP everything they got. They kept battling and fighting. There wasn’t a lack of competitiveness or lack of desire form my group. UNLV is really good and we just weren’t able to make an adjustment.”

UNLV led early, 4-3, before UTEP went on a 10-4 push to vault out to a 13-8 advantage as the fans came to life. A kill by Yasso Amin started the sequence, which was followed by an attack error for the Rebels and an ace by Kristen Fritsche. The margin grew to six (17-11) after a dig from Paulina Perez Rosas surged over the net and into open territory to force a UNLV timeout. It proved ineffective as the Miners won the ensuing point en route to staking the first set in convincing fashion, 25-15. UTEP hit a staggering .556 in the frame.

UTEP vaulted to a 3-1 edge only to have the Rebels counter to lead by two at 7-5. Perez Rosas put an end to that with a powerful swing that sliced through the defense. Serena Patterson hammered home a kill on the next point to pull the home side even at 7-7. The Rebels then moved out by two points on three separate occasions, but the Miners clawed back each time. The momentum started to change when the Miners blocked Rebels star outside hitter Mariena Hayden as part of a 4-0 run to propel them ahead at 15-13. To its credit, UNLV countered with an 8-3 surge to go out by three (21-18). Amin halted the run with a soft touch on an attack, but the Rebels regrouped to take the set, 25-21.

UNLV scored the first three points on the way to leading at 5-1 before a kill from Alianza Darley slowed the assault. The Rebels snuck out two more points, prompting a Miner timeout with the score at 7-2. The deficit was still five (8-3) before a service error was followed by an attack error to bring UTEP within three (8-5). UNLV had an answer, in the form of 7-1 surge to go out by nine (15-6). Patterson’s impactful swing found hardwood on three of the next four rallies to spark a 4-0 surge and make it 15-10. The deficit was down to four (16-12) after Darley’s kill. Another Darley kill made it a three-point differential (18-15), and this time it was time that UNLV called timeout. The stoppage slowed UTEP’s momentum, and the Rebels went on to win the set, 25-18.

The two sides traded scores over the opening stages, and it was knotted at 4-4 before UNLV found some breathing room with a three-point cushion (9-6). Patterson blasted a kill to disrupt the run, but the Rebels moved it out to a differential of five (12-7) as UTEP called timeout. An ace from Patterson inched the Orange and Blue within four (13-9), but the Rebels once again had a response with back-to-back points to put UTEP down six (15-9). It was still six (17-11) before the Orange and Blue peeled off three straight to cut the deficit in half (17-14). That would be as close as they would get, though, as UNLV held on to win the set (25-17) and match (3-1).