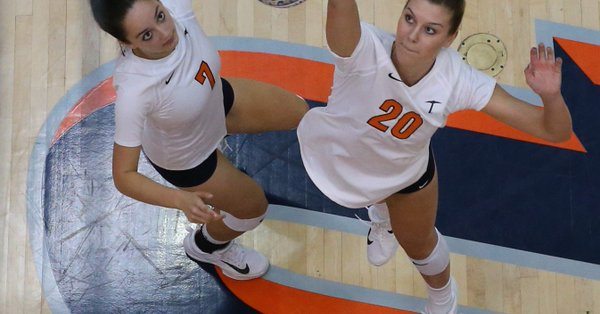 The UTEP volleyball team defeated Youngstown State 3-2, but fell to North Dakota 3-0 to split its final games of the Glory Road Invitational on Saturday.

Behind a stellar performance from sophomore outside hitter Macey Austin, the UTEP volleyball team (1-4) took down Youngstown State (4-3) to secure its first win of the season. The Miners slipped against the Penguins in set one 25-22, but took consecutive set wins 25-19, 25-21 in sets two and three. Youngstown State took set four 25-22 but the Miners rallied to take the fifth and decisive set 15-13 and the match 3-2.

Austin spearheaded the Miner offense with her season-high 25 kills, followed by freshman power duo Cheyenne Jones with 13 and Mallory Yost with 6. Austin was hitting at a .271 clip while adding three digs and two total blocks.

“Today I just kept using the block, that was how I got all my points, really,” Austin said. “I just wanted to win and didn’t want it to be like yesterday, we wanted to have more energy and come out strong and just beat them. Sahara [Martinez] stepped up in a time that she wasn’t expected to, but she came out strong, she made smart decisions and she really did a great job for just being a freshman and putting in all the work, she did awesome.”

“Sahara did a great job of getting the ball to Macey in pretty good locations where she could do a lot with it,” head coach Holly Watts said. “Cheyenne did a great job of coming in and playing her role and was dynamic and able to put the ball away. Mallory was playing a little bit of a different position than she’s used to today, but did a solid job for us. Kylie and Maddie redirected some shots, everybody was on today.”

A service ace by Austin would breathe life back into the Miners, who then battled back to get within two of the Penguins, before a kill by Margaux Thompson ended the match 25-22 in Youngstown State’s favor.

A fired-up Miner squad would return to dominate set two, with their largest margin being 21-15. Two consecutive Miner errors brought the Penguins within four, but Jones hammered down a kill slow their momentum. Youngstown State would only score twice more, before another big kill by Macey Austin would end the set at 25-19.

Now tied at 1-1 and battling for the game lead, the Miners and Penguins tied five times before the Miners began to pull away 19-13 with help from kills by Austin and Briana Arellano. Yost and Baumgartner added two more kills in the set to bring UTEP up 22-18.

Youngstown State would respond with a kill and a service ace before an attack error would give the Miners the ball back at 24-20. Arellano served to put the ball in play and the Penguins’ offense was able to score off a kill by Morgan Tippie, but Martinez surprised the Youngstown State defense with a kill, ending the set 25-21 and giving the Miners the 2-1 match lead.

Youngstown State would hold off the Miners in set four 25-22, evening the game 2-2. Set five was again a back and forth effort, including nine ties, before the Penguins were gaining momentum from consecutive service aces, forcing a UTEP timeout at 13-11. Austin came out of the timeout with a kill to give the Miners momentum and Jones followed with one of her own, and after a Penguin attack error, UTEP grabbed the 14-13 lead. Youngstown State called a timeout in an effort to slow down the Miners, but Jones, off an assist from fellow freshman Martinez, hammered down a kill to end the set 15-13, and the match 3-2.

“I think our fight was back today, we were willing to battle every point and they [Youngstown State] pushed us to do that but we responded well,” Watts said. “The win certainly helps our confidence, we’ve been talking about how good we can do and how good we can be. It’s good to see them do the things we practice in a match and then win with it. I think the other matches, those things didn’t always fall into place, but today they did enough times in the battle.”

Miners Give Them a Run, but North Dakota Goes Undefeated in Tournament

Although they dropped the first two sets 25-18, 25-15, the Miners climbed back from a 12-3 deficit, headed by an Arellano service run, a Baumgartner block, and two Austin kills to tie the game at 15 in set three.

The huge Miner run continued until North Dakota’s Jordan Vail slowed it down with a kill, bringing the score to 20-16, UTEP leading. The Miners were still pushing points as the Fighting Hawks were making a comeback, but a North Dakota block and a Miner attack error tied the game at 24, and North Dakota never fell behind, taking set three 26-24 and the match 3-0.

The Miners were led by Mallory Yost with 11 kills, followed by Macey Austin, who was named to the All-Tournament team, with nine. Sahara Martinez handed out 27 assists and Baumgartner notched two solo blocks and one block assist to lead the team. Niki Cebak picked up eight digs, Martinez added six of her own and Ashley Grzebeniak recorded five.

The Miners will return Sept. 8-9 for their final home tournament, the Borderland Invitational. First serve against Samford to open up the tournament is set for 7 p.m. (MT) on Friday, Sept. 8.