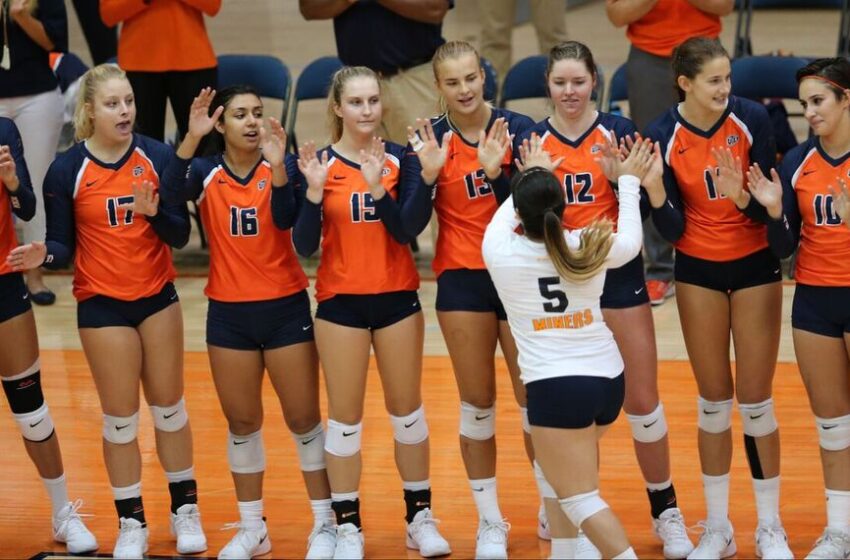 UTEP (2-2) captured a five-set thriller over UIC (3-1) Friday morning in the first match of the Omaha Challenge.

Nebraska native Mallory Yost dominated at the net, adding a career-high 10 blocks to the Miner effort. Alex Torres, Briana Bustillos and Briana Arellano all locked in double-digit digs for UTEP.

The Miners got off to a slow start to begin the first set when they fell behind 11-3. UTEP stormed back eventually tying things up at 24-24. The Flames and Miners would trade points, desperately competing for the set advantage. The performances by Patterson and Austin, with five kills each, led UTEP to an epic 29-27 set victory.

In the second set, UTEP and UIC traded blows until the score was all knotted up at 16-16. The Flames would tally off four straight points, and did not look back, taking the tightly-contested set 25-22. Austin added five more kills to her stat-line, attempting to surge the Miners.

UTEP got off to a blazing start opening the set with an 11-4 run. UIC would seize control with a big run to close the door capturing the third set 25-16.

With its back against the wall in the fourth set, UTEP staved off each run the Flames produced. The Miners eventually topped UIC in the back-and-forth set 25-23. Fritsche surged the Miner offense with 11 assists in the set.

The deciding fifth set followed the closely-battled pattern that the previous four sets had laid out. With the score tied at 7-7, Austin and Yost’s attack proved too much for UIC to handle as the Miners ballooned their lead to five 12-7. A block assist from Martine Kragholm and Fritsche, and an attacking error from UIC, finished off the match and earned the victory for the Orange and Blue 18-16.

“What a great example of fight in a team. We had a slump in the middle of the match, but came back from that so determined. I’m excited for this team and what they can do.”

The Miners (2-3) fell to the Roos (3-2), in four sets Friday evening in the second match of the Omaha Challenge.

Fritsche once again made her presence known with 37 assists, 14 digs and three kills. Austin led the way for the Miners recording 12 kills. Arellano added nine kills and 11 digs to the cause. Yost resisted a team-high four blocks. Bustillos and Torres combined for 34 digs in the match.

The first set saw 13 ties between UTEP and UMKC. Each team was vying to set the tone for the rest of the match. With the score tied at 22-22, the Miners, led by Arellano, registered the next three points to collect the victory.

In the second set with the score tied at 4-4, UMKC generated a 6-2 run that would prove too much for the Miners to overcome. UTEP put together its own late-set rally, but the Roos locked in the set, tying the set count up at 1-1.

After breaking the 6-6 tie in the third set, the Roos raced out never looking back to capture the set advantage over the Miners.

UTEP jumped out to score the first four points of the set, highlighted by a service ace from Austin. UMKC would close that gap, tying the set up at 9-9. There would be five ties the rest of the set, and with UTEP down 24-23, UMKC put the finishing touches on the match with a kill to claim its third victory of the season.

The Orange and Blue will conclude the weekend against host school Omaha (Sept. 1 3 p.m. MT) at Baxter Arena