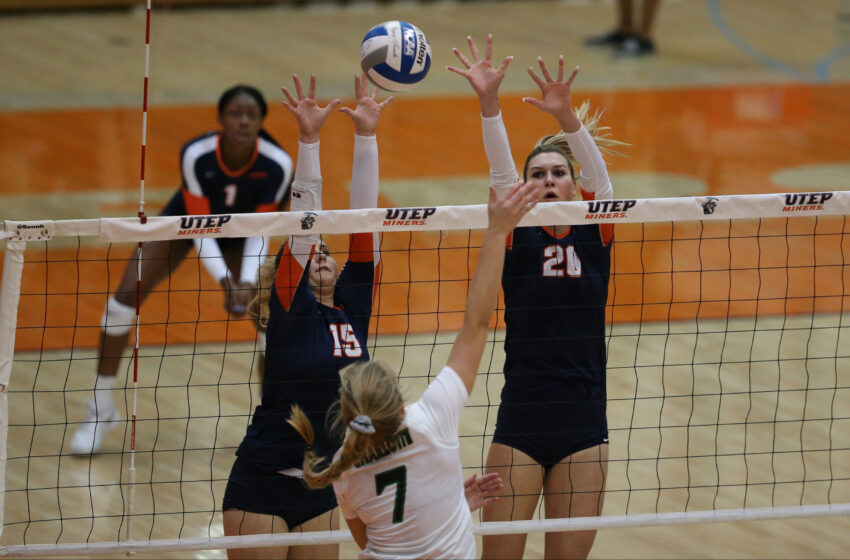 Grzebeniak had a crucial kill in the final stages of the deciding third set that secured the victory for the Miners. Setter Kristen Fritsche distributed 38 assists to her teammates and Briana Bustillos dug a team-high 17 balls.

The Miners came out firing on all cylinders in the first set, beginning with a 4-1 advantage, led by three kills from Austin and one from Baumgartner. The 49ers would respond tying up the set at 11-11.

An 8-2 run from Charlotte helped give it a 16-13 lead in the middle of the set. The Miners would immediately rectify the situation with a 6-0 run giving them a 19-16 cushion. UTEP would ride this momentum to a set victory, 25-21, behind Austin’s six kills and a blistering .455 hitting percentage.

In the second set, UTEP kept up the pace with a 9-4 lead that forced an early Charlotte timeout. The Miners were producing incredible offensive efficiency, registering a .323 hitting percentage that propelled them to an 18-11 advantage. The 49ers would rally cutting the UTEP edge to three, 21-18, which forced a timeout from the home squad.

Charlotte would maintain the pressure tying the set at 23-23. The Miners would hold off the Charlotte rally and take the set, 26-24, after a kill from Jones.

Once again, UTEP came out hot with a 6-2 run to begin the third set. The Miners would build on this to develop a 16-9 advantage that was highlighted by a block assist from Morgan and Jones. The Orange and Blue would never look back claiming the set, match and Senior Day, 25-15.