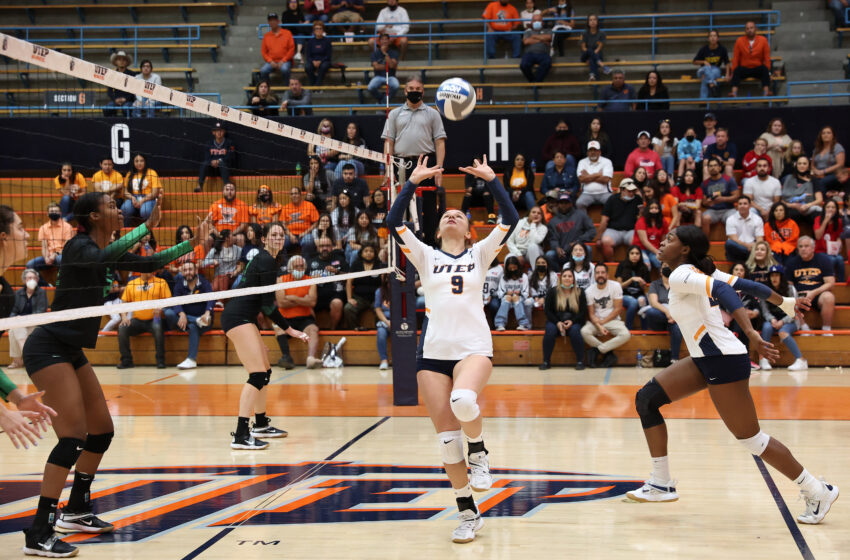 “Coming from New Mexico State, it’s not only going to be a rivalry college volleyball match, it’s going to be two buddies that want to kick each other’s tail,” Wallis said. “More importantly, it’s a chance for us to play one more really good match before the C-USA tournament starts. We’re going to put on some fun volleyball for the fan’s tomorrow night.”

The match will be broadcasted on 91.5FM KRUX and live streamed on WAC Digital Network, with live stats available.

“I’m looking forward to our match with NMSU tomorrow,” head coach Ben Wallis said. “As a defensive team moving forward into conference play, it’s a rivalry match. It’s nice for Mike Jordan and I to be able to get two good teams playing each other again because it’s only going to make each of us better.

UTEP has hit .300 or better 12 times total on the season, including five matches higher than .350. The opposition has only topped .300 twice in 25 contests on the campaign. Five Miners are swinging better than .250 on the year. Vittoria Price (.451) continues to lead the team among players with at least 75 kills.

The Miners registered a season-high 14 blocks in the 3-0 win against Louisiana Tech on Oct. 9. UTEP has posted at least 10 blocks in 10 matches this season. Alianza Darley (89), Vittoria Price (75) Kenidy Howard (75) and Ema Uskokovic (59) each have tallied at least 50 total blocks to lead the charge.

The Miners are in the top 50 in 11 categories in the NCAA and are setting historic program numbers. The campaign is No. 10 in the country in offense with the highest number of sets played, 97.

UTEP has four players ranked top 10 in five different categories in the conference: Hande Yetis is fourth in aces per set (0.36), Alianza Darley is ninth in total blocks (89), and Serena Patterson is 10th in kills per set (3.44).

Alyssa Sianez ranked in two categories: fourth in total digs (402) and eighth in digs per set (4.14).

NMSU is 18-7 (9-4 WAC) on the year, currently on a three-match win streak. The Aggies are currently tied with Grand Canyon for the top spot in the league’s West Division standings with one regular season WAC match remaining.

The program is led offensively by Katie Birtcil with 332 kills and Carly Aigner-Swesey with 792 assists. On the defense, Darian Markham paces the squad with 360 digs while Lia Mosher leads the team in blocks (77, 22 solo/55 assists).

The Series vs. NM State

New Mexico State leads the all-time series with UTEP, 65-23, but it is just the third match-up against the Aggies under head coach Ben Wallis. The Miners will be vying for a second victory over the I-10 rival this season.